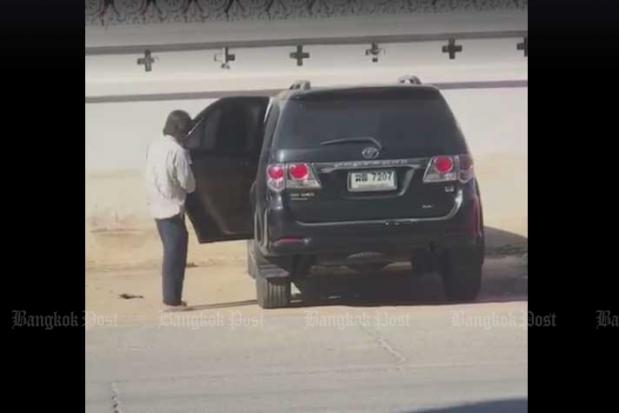 A man dressed in ragged clothes is seen after parking his SUV outside a temple in Nonthaburi. He appeared shortly after at a nearby market masquerading as a blind man and begging for money. (A screenshot from the clip)

A blind beggar at a market in Nonthaburi has been caught in a viral video clip arriving for "work" driving a Toyota Fortuner.

The clip, posted by Facebook user Chutala Joy on Tuesday, showed a man wearing ragged clothing getting out of a black Fortuner outside a temple in Nonthaburi.

He later showed up at a nearby market, wearing black glasses like a blind man and begging for money.

The clip drew criticism of the man. This attracted the attention of local police, who watched the clip and promised to find him.

Thai media reported police had already identified the beggar as Somporn Kueyen, 65. He was not blind and lived with his wife in Nonthaburi.

Mr Somporn did not return home last night after news of his masquerade hit the headlines. He and his wife reportedly moved to another house and he was expected to meet investigators at Bang Yai police station later on Wednesday, reports said.

Vendors at a market in Bang Yai district where Mr Somporn allegedly often begged for money said they were disappointed to learn the truth, that his blindness was just a lie to get money from kind-hearted  people.

Click "play" to listen to 'Blind' beggar caught driving to work and "Download" to keep this file for educational purpose.

beggar : a person who lives by asking people for money or food - คนขอทาน

begging (noun): getting money by asking people for money , on the side of the street, for example - การขอทาน

disappointed : unhappy because someone or something was not as good as you hoped or expected, or because something did not happen - ผิดหวัง

masquerade : to pretend to be someone or something that you are not - ปลอมตัว