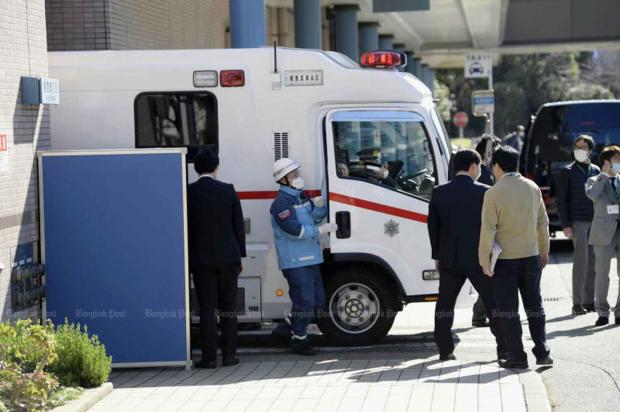 An ambulance carrying a Japanese national who was evacuated from Wuhan by a chartered plane arrives at a hospital in Tokyo, Japan. (Photo Kyodo/Reuters)

TOKYO: Three Japanese who returned from Wuhan have tested positive for the new coronavirus, the health ministry said on Thursday, as more Japanese evacuees from the Chinese city arrived in Tokyo.

The three, two showing no symptoms, were among 206 people brought back on Wednesday from Wuhan, the city at the centre of the deadly outbreak of the pneumonia-causing virus.

A further 210 Japanese were flown back home on Thursday on a second government-chartered flight, with some displaying symptoms such as coughs, according to the health ministry.

In the first group of returnees, all but two people agreed to tests for the virus. The latest group is expected to be similarly screened.

The government was considering sending a third flight for a further 200 or so Japanese citizens still intending to return home from the central Chinese city.

In addition to the three people on Wednesday's flight who tested positive for the virus, several cases have been confirmed within Japan, mostly tourists from Wuhan.

chartered : hired especially for the use of a particular group - เช่าเหมาลำ