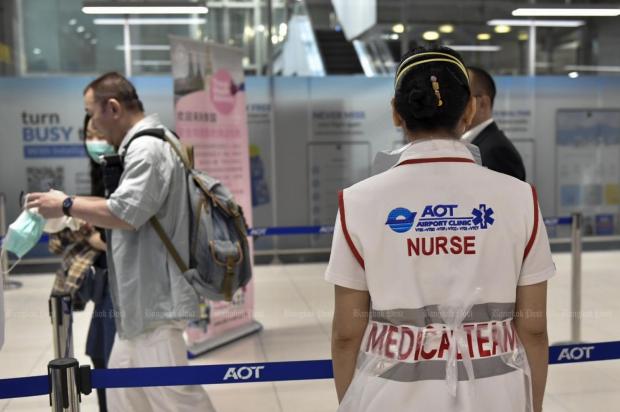 Tourism and Sports Minister Phiphat Ratchakitprakarn says the government should not scrap visas-on-arrival (VOAs) for Chinese travellers despite the public health minister insisting on a suspension.

But many businesses disagree with the proposal, saying Chinese tourists are already declining because of cancellations. Scrapping VOAs could hurt tourism relations.

In China, negative comments are spreading on social media as users voice displeasure at some countries banning visas for Chinese travellers.

Mr Phiphat said recent cabinet meetings have looked into VOA issues but have not decided on any formal resolution.

He said the number of Chinese tourists in Thailand this month is 40% lower than in the same month last year. An 80-90% drop could be expected in the next two months as the Chinese government takes steps to curb travel.

"I believe the Chinese government will clearly address the coronavirus outbreak by April," Mr Phiphat said.

Thailand has 14 infected people, all of whom contracted the virus overseas, Mr Phiphat said.

Six of them have recovered and no human-to-human transmission has been recorded in the country, he said.

Tourism Authority of Thailand (TAT) governor Yuthasak Supasorn said the government should consider the consequences of the VOA issue carefully, as the news is already being slammed on Chinese social media even though it exists only as a proposal.

Other countries that suspended VOAs for Chinese have seen a backlash on social media.

He said that with the Chinese government's ban on group travel, Thailand saw flights from China drop by 80%. Therefore a suspension may not be necessary, and it would still create negative feelings among Chinese citizens.

Click "play" to listen to Tourism minister against scrapping visas-on-arrival and "Download" to keep this file for educational purpose.

backlash : a strong negative and often angry reaction to something that has happened - การสะท้อนกลับอย่างรุนแรง

consequences : results of effects of something - ผลที่ตามมา

displeasure : the feeling of being annoyed or unhappy - ความไม่พอใจ

outbound (adj): travelling towards a particular point, particularly away from a city, country, etc. - ขาออก (opposite of inbound ขาเข้า)

scrap : to get rid of; to stop using or accepting - เลิก, ทิ้ง