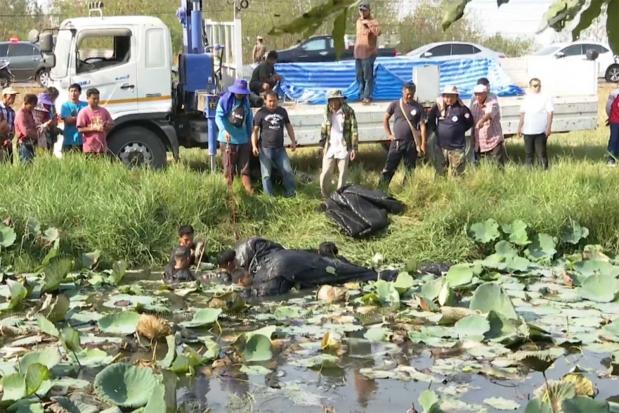 Rescue workers try to retrieve the dead giraffe from a roadside ditch in Chachoengsao province on Thursday. (Screenshot from TV Channel 8)

A giraffe that escaped from a container of zoo animals on the way to Prachin Buri was found dead on Thursday after a two-day search.

The giraffe was found in the ditch at around 1.30pm. The animal was partially covered with leaves, Thai media reported.

Safari World Plc staff and rescue workers tried to retrieve the carcass from the ditch. Veterinarians would investigate the cause of the animal’s death.

On Tuesday, a convoy of 24 lorries with the animals in containers left Suvarnabhumi airport about 4pm. The destination was an animal breeding station in Prachin Buri.

The animals were imported by Safari World Plc, which operates a number of zoos in Thailand.

Two giraffes jumped from the back of the lorry as it slowed in highway traffic after leaving Bangkok's main airport on Tuesday.

A 4-metre-tall giraffe was recaptured with a tranquiliser shot, but there was no sign of the other one, which was 5-6 metres tall.

A video clip shows a man speeding his motorcycle and hitting a giraffe along Highway 304 in Chachoengsao province. (Nuntiya Mahathein Facebook)

Click "play" to listen to Escaped giraffe found dead and "Download" to keep this file for educational purpose.

ditch : a long narrow open channel dug into the ground usually at the side of a road or field, which is used especially for supplying or removing water, or for dividing land - คูน้ำ

giraffe (noun): a tall African animal with a very long neck, long legs, and dark marks on its coat - ยีราฟ