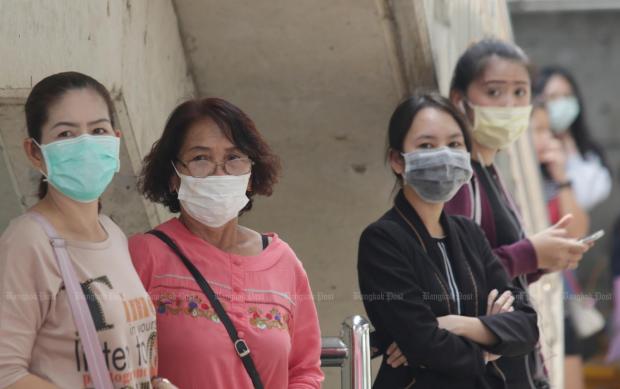 Commuters don facial masks as they wait at a bus stop in Don Muang district, in light of the fine dust pollution and the coronavirus scare. Photo by Apichit Jinakul

The Bangkok Metropolitan Administration (BMA) has ordered all construction work in Bangkok -- including seven electric train projects -- to stop until Thursday as it steps up efforts to reduce levels of dust pollutants shrouding the city.

The order was announced by Bangkok governor Aswin Kwangmuang, after 33 out of 50 districts across the capital reported harmful levels of dust on Monday.

"The cooler weather is causing dust particles to linger over Bangkok," a city spokesman said.

Contractors have been ordered to halt construction work across the city, as these sites are known to be major contributors of PM10 -- pollutants which measure less than 10 micrometres in diameter.

"Between 60-70% of the fine pollutants in Bangkok are PM10, so a pause in construction will definitely help clean the air," the spokesman said.

In addition to road and building works, the state's electric railway projects will also be affected by the order.

About 64% of PM2.5 particles found in the air across Bangkok come from the transport sector, the spokesman added.

The BMA has also asked the Department of Industrial Works to check on emissions from factories.

On Jan 22, the city ordered 437 schools in Bangkok to close because of hazardous dust levels.

It has since reopened all these schools, after the capital's air quality improved slightly.

According to city officials, PM2.5 levels ranged between 54 and 77 microgrammes per cubic metre (µg/m³) over the past 24 hours.

Upcountry, officials have been ordered to prohibit outdoor burning, another major source of PM2.5, as farmers prepare to clear their land for next season's crop.

Click "play" to listen to Building stopped to reduce pollution and "Download" to keep this file for educational purpose.

exhaust fumes : the waste gas from an engine, especially a car's, or the pipe the gas flows through - ควันท่อไอเสีย

linger : to stay somewhere longer than is necessary or required - อ้อยอิ่ง

prohibit : to not allow; to ban - ห้าม