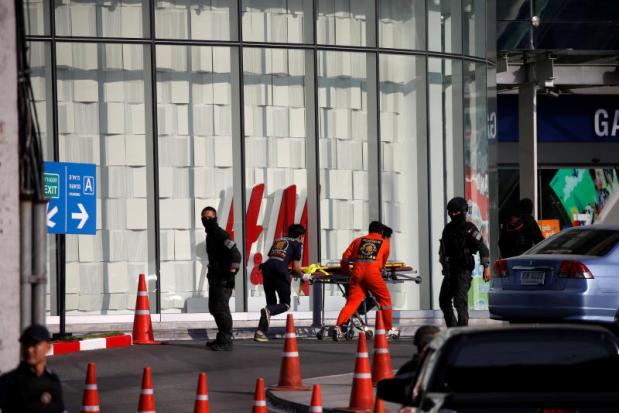 Commandos on Sunday killed a soldier after he carried out a shooting rampage in Korat that left at least 20 people dead, police said.

"The official death toll is 20 and wounded 42... nine are in surgery," Narinrat Pitchayakamin, a Korat doctor told reporters, revising down an initial death toll of 21.

But it was unclear if there were more victims inside the multi-level complex which was packed with Saturday shoppers when the gunman stormed in.

A number of ambulances left the front of the complex and forensic police poured into the crime scene, shortly before the gunman's death was confirmed.

The night saw heavy exchanges of gunfire and evacuations.

A provincial public health official told a press conference on Sunday 20 people had been killed and 42 injured.

The figures excluded five others found hurt in the shopping centre on Sunday morning.

But it was unclear how many people remained inside the mall.

The latest casualty was a police officer who took part in a raid around 3am to force the gunman out.

As shoppers ran for the exits late Saturday, police urged evacuees to "raise their hands" and identify themselves on the ground floor over fears the gunmen could hide among the crowds.

Earlier, Sgt Maj 1st Class Jakrapanth relayed his shooting spree through Facebook posts which charted the attack from the army barracks in the city to the mall, where an unknown number of shoppers remained trapped.

Throughout the day, Sgt Maj 1st Class Jakrapanth posted images of himself and wrote several posts on his Facebook page as the attack unfolded.

Click "play" to listen to Mass shooter killed at Terminal 21 in Korat, 20 dead and "Download" to keep this file for educational purpose.

assailant : someone who violently attacks another person - ผู้ทำร้าย

bloodshed : a situation in which people are killed or injured, especially during fighting - การนองเลือด

evacuee : a person who leaves a place of danger - ผู้อพยพ

hole up : to hide in a place - ซ่อนตัว

hostage : a person who is the prisoner of someone who threatens to kill them if they do not get what they want - ตัวประกัน

revise : to change, improve, or make additions to something - แก้ไข

spree (noun): a period of time when you do a lot of some activity -- good, such as eating or shopping or bad, such as killing -

storm : to use force to enter a place and take control of it - บุกกระหน่ำ

volley (noun): a lot of bullets, stones, etc. that are fired or thrown at the same time - การระดมยิง