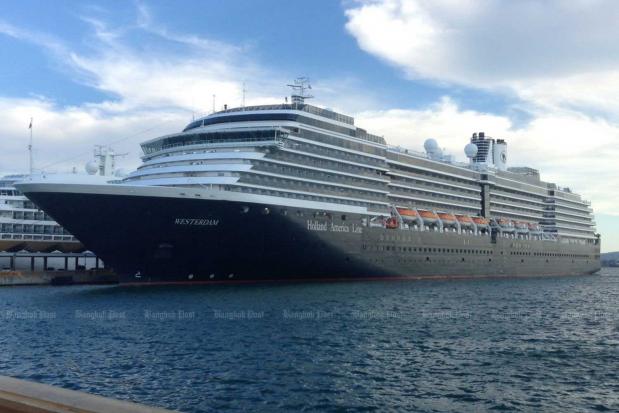 The Marine Department on Wednesday confirmed the cruise ship Westerdam had not yet asked to enter Thailand, having already been refused entry by three other countries due to fears of coronavirus infections on board.

The department's statement did not rule out the possibility the Westerdam would be allowed to dock after  completing quarantine requirements.

If the operator, Holland America Line, made an application the department would consult with the Disease Control Department, the Public Health Ministry, the Customs Department and the Immigration Bureau.

If allowed into Thailand, the ship would be moored in a quarantine area offshore pending checks by disease control and public health officials before being allowed to dock at a port.

The announcement followed unconfirmed reports on social media that the Westerdam, with 1,455 passengers and 802 crew, would dock at Laem Chabang on Thursday. It was earlier refused entry by the Philippines, Taiwan and Japan due to concerns passengers may be carrying to the deadly virus.

The cruise ship left Hong Kong on Feb 1, and is still off the southern coast of Vietnam.

On Tuesday, Prime Minister Prayut Chan-o-cha said that while the vessel would not be allowed to dock, Thailand was ready to help the people on board.

The Public Health Ministry said it was ready to send medical staff to the port if requested, the head of the  Department of Disease Control said.

consult : to ask for information or advice from someone - หารือ

dock (verb): to arrive at an enclosed area of water in a port, where ships stay; to stop a boat at a landing point such as a pier - จอดเรือ, เทียบท่า

moor : to attach a boat, ship, etc. to a fixed object or to the land with a rope, or anchor it - ผูกเรือ, จอดเรือ