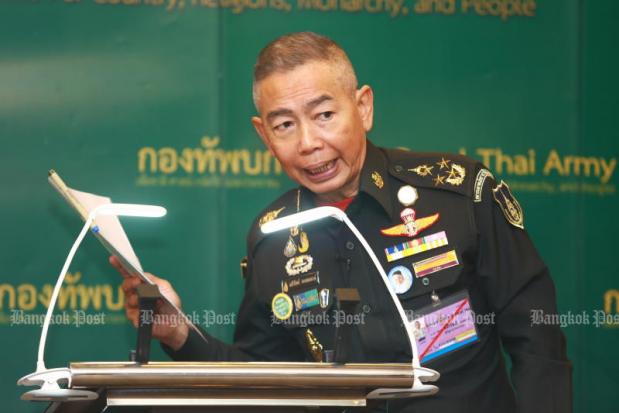 Army chief Gen Apirat Kongsompong said the army will sign a memorandum of understanding with the Finance Ministry to ensure sound management of its commercial and welfare schemes. (Bangkok Post file photo)

Following his promise to bring transparency to the army, commander Apirat Kongsompong said on Wednesday the army will sign a memorandum of understanding with the Finance Ministry to ensure sound management of its commercial and welfare schemes.

He said the implementation will be divided into phases with army-run golf courses, boxing stadiums and the Suan Son Pradipat Army Rehabilitation and Recreation Centre in Prachuap Khiri Khan being the first to come under the Finance Ministry's oversight.

According to the army chief, these businesses -- which were originally introduced as part of a welfare scheme for army personnel -- will be managed by professionals from the private sector.

"We will use professionals rather than our own people [to run the businesses] -- but our personnel will work alongside them," he said.

Gen Apirat insisted he would make good on his promises to bring transparency and accountability to the barracks after a mass shooting at the weekend in which a personal conflict between the soldier-shooter and his superior was blamed.

According to an army source, the planned MoU is expected to cover internal welfare and commercial schemes, as well as the use of army land, which is leased to it by the Treasury Department. The source said the army has more than 30 golf courses nationwide, but claims none of them make any profit.

Meanwhile, Future Forward Party leader Thanathorn Juangroongruangkit yesterday called on the army to stop engaging in any commercial operations if it wanted to truly reform itself.

Mr Thanathorn, a critic of the military, said the army's income from private business operations, known as off-budget funds, is not returned to the state's coffers so its spending is not scrutinised or regulated. "I want Gen Apirat's reforms to succeed. He should start by improving transparency," he said.

Click "play" to listen to Finance Ministry to oversee army businesses and "Download" to keep this file for educational purpose.

accountability : a situation where people have the right to ask you about or criticise you for something that has happened - ความน่าเชื่อถือ

barracks : a group of buildings where members of the armed forces live and work - โรงหรืออาคารใหญ่เป็นที่พักทหาร

critic : a person who expresses disapproval of somebody/something and talks about their bad qualities, especially publicly - ผู้วิจารณ์, ผู้จับผิด, ผู้วิเคราะห์

implementation : the process of making something such as a plan, system, idea or law start to work and be used - การบังคับใช้ (กฎหมาย)

private sector : businesses and industries that are not owned or controlled by the government - ภาคเอกชน

professional : a person who does a job that needs special training and a high level of education - ผู้เชี่ยวชาญในวิชาชีพ,ผู้มีวิชาชีพ

profit : money that you make from selling goods and services after all your costs have been paid - กำไร

reformer : a person making improvements to the way an organization or society works - ผู้ปฏิรูป

transparency : an honest way of doing things that allows other people to know exactly what you are doing - ความโปร่งใส