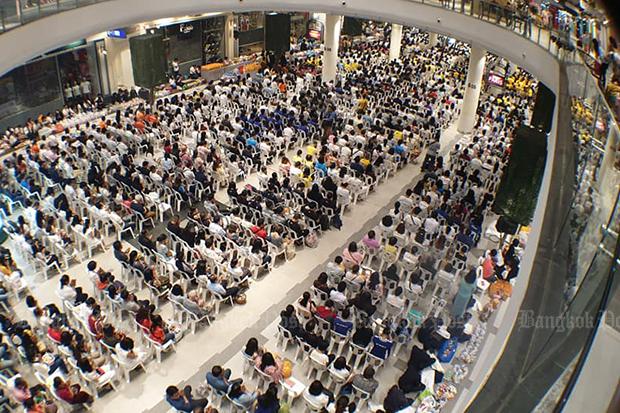 Thousands of people take part in religious ceremonies prior to the reopening of Terminal 21 in Nakhon Ratchasima on Thursday. (Prasit Tangprasert)

NAKHON RATCHASIMA: Terminal 21 reopened for business on Thursday after the shopping centre was shut down by a gunman on Saturday, during a rampage that claimed 30 lives and left 58 people wounded.

Shop owners, well-wishers and officials first gathered at the mall for a morale boosting  "Strong Together" event. It started with a merit-making rite by 219 monks, followed by chanting for good luck and a bai si blessing ceremony.

Many posters on social media made a point of promising to continue using the shopping mall, despite the weekend's nightmare events.

"Give everybody working at the mall my support to get through what has happened," Charto de Pratunam wrote on a Facebook account.

"When you don't leave the people of Korat, we won't leave you, either," Ittipon Weangsantia wrote.

Terminal 21 was the centre of the carnage on Saturday and into Sunday, as Sgt Maj 1st Class Jakrapanth sprayed hundreds of bullets at people shopping and working there after beginning his killing spree in an army camp.

He took 29 lives and hurt 58 others before police commandos shot him dead on Sunday morning.

Click "play" to listen to Terminal 21 in Korat reopens and "Download" to keep this file for educational purpose.

carnage : a situation in which there is a lot of death and destruction - การฆ่าอย่างโหดร้าย

chant : to sing a piece of religious music using a very limited range of notes - ร้องเพลงสวด

morale : the amount of confidence and enthusiasm, etc. that a person or a group has at a particular time - กำลังใจ, ขวัญ

spray bullets : to shoot a lot of bullets in many directions in a short period of time - กระสุน

spree (noun): a period of time when you do a lot of some activity -- good, such as eating or shopping or bad, such as killing -

well-wisher : a person who expresses their good wishes or sympathy, often to someone who they do not know - ผู้ปรารถนาดีต่อผู้อื่น