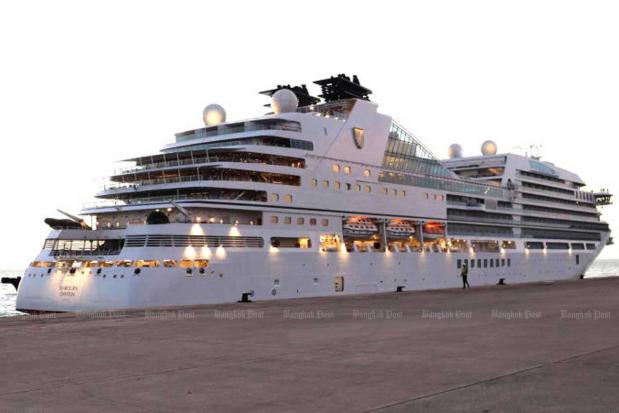 More than 4,000 passengers and crew members from two cruise liners were allowed to leave their ship in Phuket on Thursday, after public health officials said they had cleared them of the coronavirus.

This has prompted criticism of double standards after the Westerdam cruise ship was turned away on Wednesday.

The Seabourn Ovation, which has 495 passengers and 470 staff on board, anchored at the Phuket deep-sea port on Thursday. It was returning from Malaysia's Langkawi Island. Everybody onboard, most of them European, were screened by public health officials before being given permission to step ashore.

Phuket Marine Office confirmed all passengers and crew on the ship had tested negative. The ship was anchored for just 10 hours before it departed for Singapore.

Another cruise liner, Quantum of the Seas, with 3,100 passengers and crew on board, docked at Phuket's Patong pier, and everybody was allowed to disembark after their temperatures were tested. The ship then continued to Singapore.

Doctors on board the ship reported all passengers and crew had no symptoms of the virus and were able to be traced as the ship was in port for just 10 hours, the spokeswoman said. This was different from the Westerdam which sought permission for an emergency docking and was turned away by Thailand and four other countries, she said.

#seabournovation has been trending on Twitter in Thailand as internet users questioned the seemingly different standards applied in the cases of the Seabourn Ovation and the Westerdam.

Click "play" to listen to Phuket cruise ship allowed to dock and "Download" to keep this file for educational purpose.

anchor : to prevent a boat from moving by dropping a large very heavy object (an anchor) connected to the ship into the water - ทอดสมอ

disembark : to leave a vehicle, especially a ship or an aircraft, at the end of a journey - ออกจากพาหนะ

dock (verb): to arrive at an enclosed area of water in a port, where ships stay; to stop a boat at a landing point such as a pier - จอดเรือ, เทียบท่า

double standards (noun): a rule or standard of good behaviour which, unfairly, some people are expected to follow or achieve but other people are not - สองมาตรฐาน