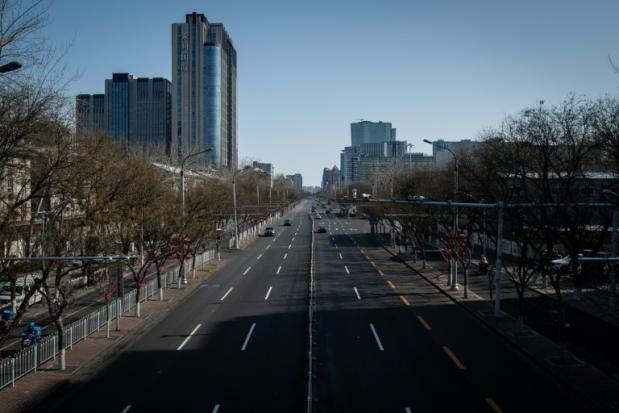 Chinese authoritives have taken drastic measures, including lockdowns, to try and stop the spread of the new coronavirus

BEIJING: The number of reported new cases from China's coronavirus epidemic dropped for a third consecutive day on Sunday, as the World Health Organisation chief warned it was "impossible" to predict how the outbreak would develop.

Global concern remains high about the spread of the virus, which first emerged in China's central Hubei province in December, with the first death outside Asia reported in France this weekend.

The death toll jumped to 1,665 in mainland China on Sunday after 142 more people died from the virus. More than 68,000 people have now been infected -- but the number of new cases of the COVID-19 strain continued to decline.

The number of new cases in other parts of the country has dropped for twelve straight days.

Chinese authorities have placed some 56 million people in Hubei and its capital Wuhan under quarantine, virtually sealing off the province from the rest of the country in an unprecedented effort to contain the virus.

Local authorities around the country have introduced measures to try and stop the virus spreading.

Outside mainland China, an 80-year-old Chinese tourist in France was the fourth person to die from the new coronavirus, with the other deaths in the Philippines, Hong Kong and Japan.

The biggest cluster outside China is on a quarantined cruise ship off Japan, with 335 infections now as dozens more cases were confirmed.

A US State Department spokesperson said Americans stranded on the vessel would be evacuated, and would face a further quarantine of two weeks in the United States.

Hong Kong authorities also announced it would charter a flight for city residents on the ship, who would stay at a quarantine centre for 14 days on their return.

Several countries have banned arrivals from China and major airlines have cut services to the country.

Click "play" to listen to Virus toll hits 1,600 as new cases slow and "Download" to keep this file for educational purpose.

charter (verb): to hire especially for the use of a particular group - เช่าเหมาลำ

straight : consecutive; happening one after the other, without interruption - ต่อเนื่อง