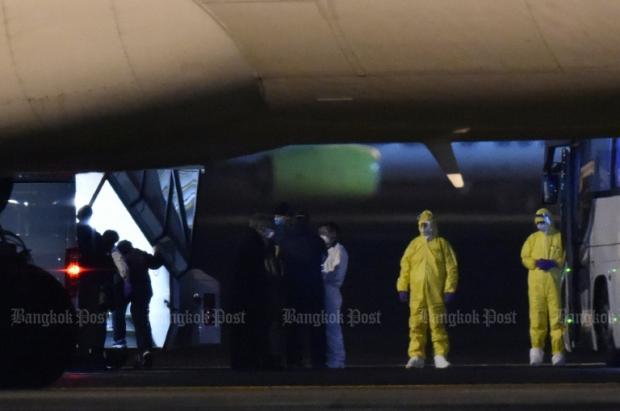 US passengers board a plane at Tokyo's Haneda Airport to fly home after they left the quarantined Diamond Princess cruise ship off Yokohama.

YOKOHAMA, Japan: The US flew home its citizens from a coronavirus-infected cruise ship in Japan Monday, with other nations preparing to follow.

More than 70,500 have been infected across China by the COVID-19 virus as the world battles to contain the outbreak that has sparked panic around the world.

Outside China, the biggest cluster of infections is on the Diamond Princess cruise ship off Yokohama, where coronavirus cases have climbed quickly to 355 despite passengers being confined to their cabins during a 14-day quarantine.

And amid growing criticism of Japan's handling of the ship, governments are scrambling to repatriate their citizens, with Canada, Australia, Italy, Israel and Hong Kong ready to act.

In the early hours of Monday morning, a convoy of buses driven by people in head-to-toe protective suits removed American passengers from the ship.

There were no health checks at that point, said US passenger Sarah Arana, a 52-year-old medical social worker, who said the US government should have acted "much sooner, at the beginning."

"I am happy and ready to go," Arana told AFP before leaving the ship. "We need a proper quarantine. This was not it."

The US embassy in Japan confirmed two jets had left Japan en route to the US. Those on board were expected to undergo a further 14-day quarantine period on US soil.

Some Americans on the ship, however, declined the government's offer.

"My health is fine. And my two-week quarantine is almost over. Why would I want to be put on a bus and a plane with other people they think may be infected when I have spent nearly two weeks isolated from those people?" tweeted Matt Smith, an American lawyer on the ship with his wife.

He described a fellow American passenger standing on her balcony chanting "USA, USA" as buses arrived to collect them.

"Of course, in contravention of the rules of quarantine, she's not wearing a face mask, and she's talking with a passenger on the adjacent balcony... And you wanted me to get on a bus with her?"

Click "play" to listen to Americans leave Japan virus ship and "Download" to keep this file for educational purpose.

panic : a sudden strong feeling of fear or worry that causes you to be unable to think clearly or calmly - ความตื่นตกใจ

repatriate : to send or bring someone back to their own country - ส่งคนกลับประเทศ

scramble : to do something in a hurry - รีบเร่ง