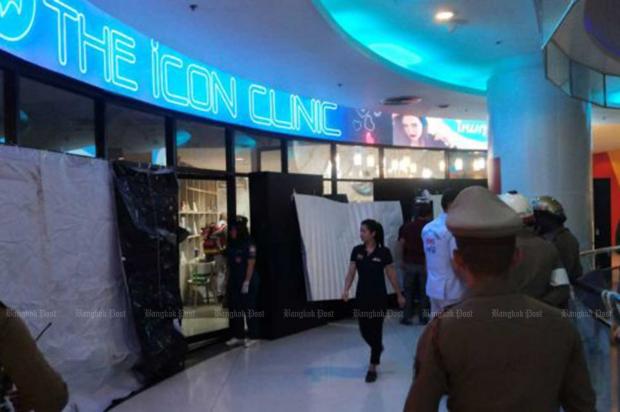 The attack occurred at the fourth floor of Century Plaza on Phaya Thai Road about 3.22pm.

A 28-year-old woman, an employee of the cosmetic clinic, was shot dead, hit by 3-4 bullets in her head and body. Another woman, 28, also an employee, was wounded and rushed to a hospital, Thai media reported.

Police cordoned off the area. Seven spent 45-calibre cartridges were found scattered at the scene.

Investigators suspect jealousy as the motive for the murder. A manhunt was launched for the killer.

cartridge : a small metal tube containing a bullet and an explosive substance that  is fired from a gun - ปลอกกระสุนปืน

cordoned off : stopped from entering an area by putting something such as a rope around it - กั้นด้วยเชือกหรือเครื่องกั้น

jealousy : a feeling of unhappiness and anger because someone has something or someone that you want - ความขี้หึง, ความหึงหวง

manhunt : an organised search for a person, especially a criminal - การล่าหัว  การตามล่าจับกุม