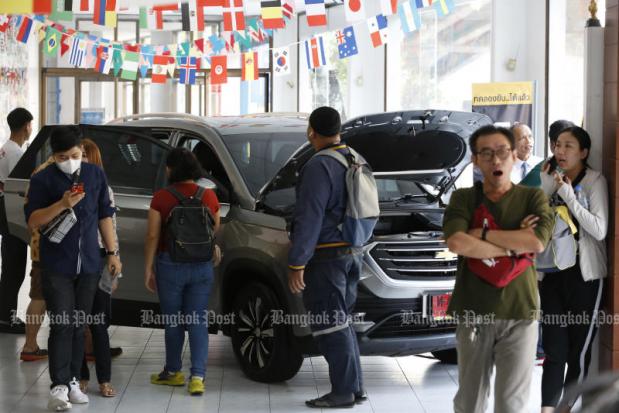 Buyers visit a Chevrolet dealer in Ratchathewee on Wednesday after the car maker began a sales campaign. (Photo by Pornprom Satrabhaya)

Buyers flocked to Chevrolet showrooms on Wednesday to snap up models sold at discount prices after General Motors decided to withdraw from Thailand by the end of the year.

Outlets selling the American brand were busy with potential buyers on Wednesday after the sale began -- with some models going for less than half price. The new Captiva 1.5 LS Turbo, for instance, was offered at 499,000 baht -- down from 999,000 baht.

The Captiva SUV is one of the best-selling Chevrolet models in the country.

"The Bang Jak showroom has temporarily stopped selling the Captiva. We will inform you if more become available," the dealer in Bang Chak area posted in a Facebook message.

A sales manager at a dealer in Pattaya said he sold more than 100 cars on Wednesday to both Thai and foreign customers.

The sales campaign follows the decision by GM to stop selling Chevy in Thailand and sell its Rayong factory to a Chinese company by the end of this year. About 1,500 workers will be unemployed after the American company closes down its Thai operations, along with those in Australia and New Zealand.

Click "play" to listen to Buyers flock to Chevrolet for cheap cars and "Download" to keep this file for educational purpose.

for instance : for example - ตัวอย่างเช่น