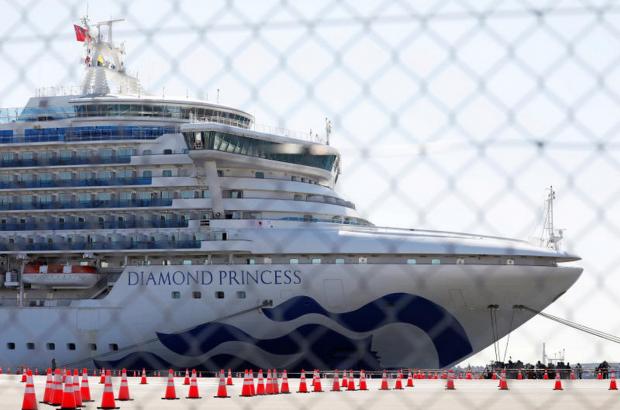 Three Thais aboard the quarantined cruise ship Diamond Princess, moored in Japan, are infected with the new coronavirus (Covid-19), officials announced on Thursday, as two elderly Japanese passengers were reported to have died from the disease.

More than 620 of the passengers on the Diamond Princess liner have been infected on the ship, which has been quarantined since Feb 3, initially with about 3,700 people on board.

"Their conditions are stable... Japan admitted them to hospital when their symptoms showed, before the test results were known," he said.

NHK, citing a government source, said the passengers who died were both Japanese, a man and woman in their 80s.

Meanwhile, Beijing reported a big drop in new coronavirus cases on Thursday, fuelling hopes the epidemic is nearing its peak.

The death toll in China rose to 2,118 as 114 more people died, but health officials reported the lowest number of new cases there in nearly a month, including in the hardest-hit province, Hubei.

More than 74,000 people have been infected in China and hundreds more in some 25 countries, with Iran reporting two deaths, the first fatalities in the Middle East.

The rapid spread of the disease - Japan has well over half of the known cases outside China - has sparked criticism of authorities just months before Tokyo is due to host the Summer Olympics.

Click "play" to listen to Virus ship: 2 die, 3 Thais infected and "Download" to keep this file for educational purpose.

crew : the people who work on a ship, aircraft, etc. - ลูกเรือ

epidemic : a large number of cases of a particular disease happening at the same time in a particular community - โรคระบาด

stable : with a healthy mental and emotional state - มีสุขภาพจิตดี