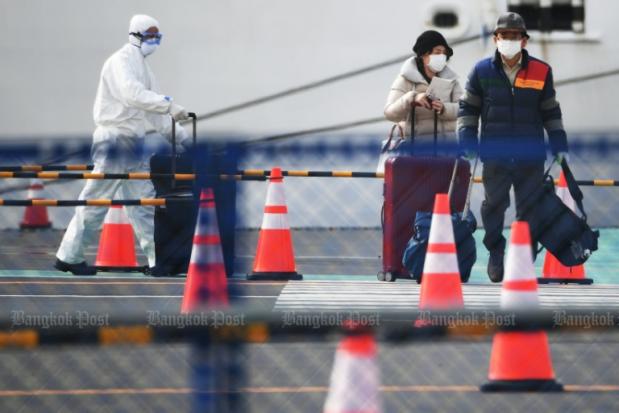 Two of the hundreds of people allowed to leave the Diamond Princess after testing negative for the new coronavirus.

Hundreds of people have been allowed to leave the ship after testing negative for the disease and many have returned to their home countries to face further quarantine.

Some 164 Australians aboard the Diamond Princess were cleared for transfer from the ship to quarantine in Australia's remote north earlier this week.

But hundreds of Japanese passengers were cleared and warned only to "stay at home unless absolutely necessary," and to "never use public" transport and use a mask if they do go out.

A total of six Australian evacuees have now been retested and the two -- described as "an older person" and "a younger person" -- tested positive.

"I just want to reassure the community that whilst this is another two cases in Australia, it's a first for some time now. These were expected and we're well-placed to manage them," he said.

Fifteen previous cases of coronavirus had been linked to the outbreak of the disease in China.

Murphy also expressed confidence that Japan and South Korea -- where the number of infections nearly doubled Thursday to 104 -- would be able to contain the disease.

Click "play" to listen to Two Australians from Japan ship have coronavirus and "Download" to keep this file for educational purpose.

confidence : being certain of your abilities or of having trust in people, plans, or the future - ความมั่นใจ

evacuee : a person who leaves a place of danger - ผู้อพยพ