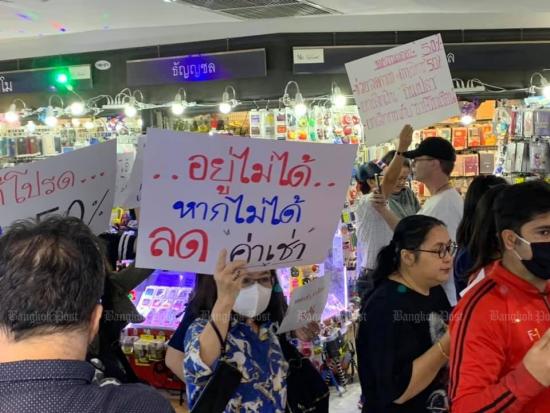 Tenants call for reduced rental rates at MBK after a drastic sales drop caused by the coronavirus outbreak. (Photo courtesy of YouLike Facebook)

The atmosphere at NaRaYa, a popular bag retailer at Ratchaprasong intersection, has completely changed during the past several months. Long queues of customers and busy cashiers have not been seen at the store since the coronavirus outbreak.

It's also quiet at Big C Supercenter's Ratchadamri branch, whose Thai souvenir zone on the ground floor used to be popular with Chinese shoppers. It's the same story at some shops in Terminal 21, another draw for Chinese tourists.

"Tour buses and almost all Chinese shoppers have gone away," said a salesperson at Big C who asked not to be named.

The Thai Retailers Association said the 3.8-trillion-baht retail industry is in dire straits as the viral outbreak drives shoppers away.

Palm, 35, a trader at Platinum Fashion Mall in the Pratunam area, said sales of fashion products at her shop fell by 50% in January, with as much as an 80% drop anticipated in February.

"Some shops on the third, fourth and fifth storeys of Platinum were closed because they don't have products to sell, as traders from China cannot send their products to Thai partners," Mrs Palm said.

The situation is the worst she's confronted since events like the 2010 political protests and the 2011 floods.

Tenants at MBK shopping centre two days ago protested against MBK and asked management to come up with aid measures such as reducing the rent.

Last week, traders at Platinum Fashion Mall sent an open letter to the management seeking support, while a Platinum spokesman said management is also mulling a reduction in rent during these tough times.

"In the several decades I've been in the retail business, 2020 is the most difficult year," Mr Paibul said. "Chinese shoppers have shunned our country, while locals aren't going shopping. Revitalising the retail market is difficult because I don't know when the virus outbreak will be brought under control."

He expects the overall retail industry to lose several billions of baht in the first quarter.

anticipate : to expect something - คาดหมาย,มุ่งหวัง

mull : to think carefully about something over a period of time - ครุ่นคิด

protest : a meeting or rally, sometimes forceful or violent, of people who strongly disagree with something - ชุมนุมประท้วง

retailer : a person or company that sells goods directly to the public for their own use - ผู้ขายปลีก

souvenir : something that you buy during a holiday or at a special event to remind you later of being there - ของที่ระลึก

tenant : a person who pays rent for the use of a room, building, land, etc. to the person who owns it - ผู้เช่า

trader : someone who buys and sells things - ผู้ค้า