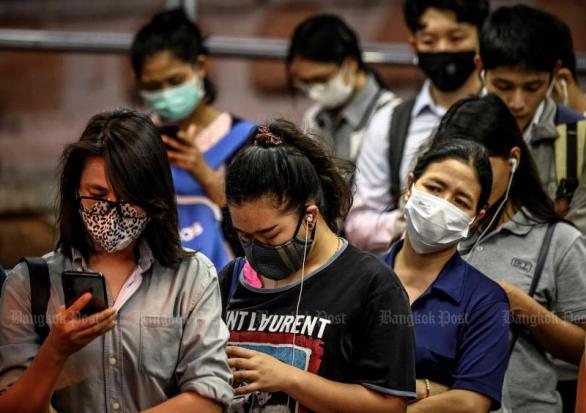 Commuters wearing protective facemasks amid fears of the spread of the COVID-19 coronavirus wait to board a boat on the Chao Phraya River in Bangkok on Tuesday. (AFP photo)

Authorities criticised one of the patients for denying they had taken a trip to Japan and said the country will step up efforts to contain the disease.

Two of the new patients, all of whom were Thai nationals, had returned from vacation in Japan's northern island of Hokkaido and came into contact with the third patient, an 8-year old boy.

The male patient had not disclosed his travel history when he first sought medical attention and risked becoming a super-spreader, an incident of large transmission from a single source, health minister Anutin Charnvirakul said.

"We have to criticise this case ... it creates a lot of trouble for us," Mr Anutin said.

The patient came to the hospital on Feb 23, but did not disclose his travel history until the next day, B.Care Medical Center said in a statement.

The patient came into contact with 30 medical personnel at the hospital, who later tested negative for the virus and are in self-quarantine at home, the statement said.

Passengers, cabin crew and students in the boy's class were all being tested, officials said.

Public Health Ministry officials will be prohibited from travelling to risky countries, he added.

In an earlier Facebook post, Mr Anutin said Thailand has detected more suspected cases and groups at risk of contracting the disease, as well as infections from travellers returning home after visiting high-risk countries.

“Those who are planning to travel abroad in this period, if it’s possible to avoid that, please avoid it,” Mr Anutin said. “We are entering a full war with Covid-19.”

Returning travellers must report where they went to disease control officers stationed at airports, he said in the Facebook post, adding people shouldn’t hide symptoms as that could cause the virus to spread.

"Even though tickets are cheap, it could be your last holiday."

avoid : to stay away from; to not use - หลีกเลี่ยง

disclose : to give information to people - เปิดเผย

discourage : to make someone feel like something should not be done - ทำให้ไม่อยาก (ทำสิ่งใดสิ่งหนึ่ง)

prohibit : to not allow; to ban - ห้าม

promotion : activities done in order to increase the attendance at an event or sales of a product or service - การส่งเสริม