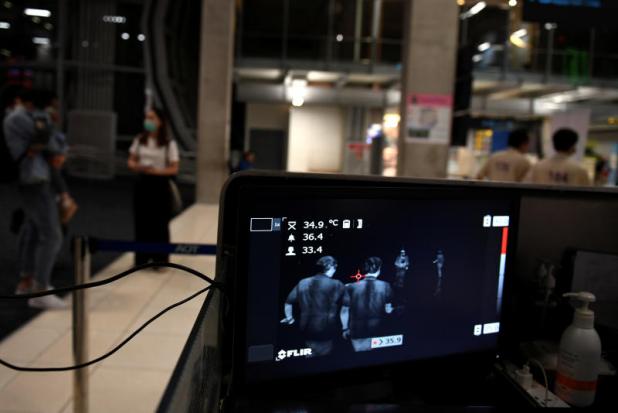 Passengers are seen on screen as they pass through a thermal scanner upon arriving at Suvarnabhumi airport on Feb 20. (Reuters photo)

The government has defined four countries and two territories as dangerous zones and restrictions may follow to prevent the outbreak of coronavirus.

The move came as the Thai postal service began disinfecting all packages received from overseas, although the World Health Organization has said it is safe to receive post from badly affected countries such as China.

No quarantine measure has been officially announced, but Public Health Ministry spokesman Rungrueng Kitphati told Reuters on Thursday it would come into effect on Friday.

"Thais and foreigners who came from these places would have to go through self-quarantine for 14 days at home or in a hotel room, where they have to report themselves to the authorities every day or officials will come to check on them," Dr Rungrueng said.

This means that all arrivals from these places, including those that transit through them, will have to provide the authorities with their addresses and travel plans and be self-quarantined for 14 days.

Those that breached the quarantine will face a 20,000-baht fine, Dr Rungrueng said.

Arrivals who display coronavirus symptoms will be sent directly to government hospitals.

The government has to date been reluctant to restrict travel for fear it would further affect the ailing tourism industry, which makes up almost 20% of gross domestic product. Ministers and high-ranking officials have given mixed signals on the issue and even contradicted one another at times.

As for thousands of Thais gradually returning home from South Korea, the government has prepared facilities for the 14-day quarantine for those from Gyeongsang province and the city of Daegu, currently epicentres of the virus outbreak, the government said.

The country has recorded a total of 47 coronavirus cases since January, with one fatality. Thirty-one of the coronavirus patients have recovered and returned home, while 15 are still being treated in hospitals.

Click "play" to listen to Six places now "dangerous zones" and "Download" to keep this file for educational purpose.

communicable disease : a disease that can spread from one person or animal to another - โรคที่สามารถติดต่อได้

contradict : to say that the opposite of what someone has said is true - ขัดแย้ง

gross domestic product : the total value of all goods and services produced in a country in a year, except for income received from money invested in other countries. It is often simply called GDP - ผลิตภัณฑ์มวลรวมภายในประเทศ

transit : to move something from one place to another - ส่งผ่าน