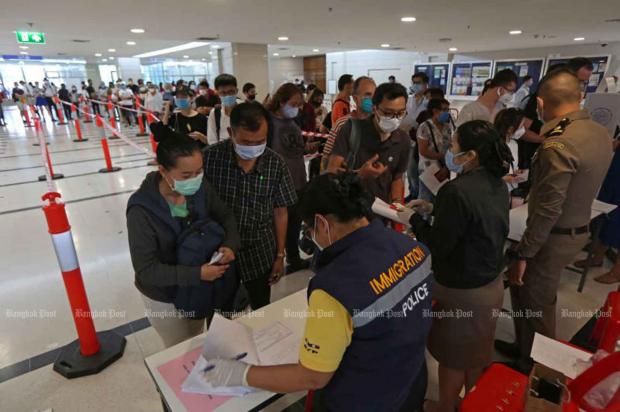 Foreigners report to the Immigration Bureau on Chaeng Watthana Road in Laksi district of Bangkok on Tuesday. (Photo: Varuth Hirunyatheb)

The Immigration Bureau (IB) wants foreign residents not to come to its offices to make their 90-day place of residence report after overcrowding put paid to its attempts at one-metre social distancing against Covid-19.

Foreigners living in Thailand are being asked to process their 90-day reports at home via an online platform or by post, IB deputy spokesman Phakkhaphong Saiubon said on Wednesday.

Applicants are usually required to report in person to immigration officers to complete the procedure.

But at Immigration Bureau's Division 1 on Chaeng Watthana Road on Wednesday, the office was so overcrowded that people were forced to wait in a nearby compound that once housed a now-shut down market, officials said.

The office serves foreigners who want to renew their visas as well as migrant workers who are required to process some paperwork.

"Up to 1,000 chairs were brought into the IB building and the compound and placed at a safe distance," Pol Col Phakkhaphong said, referring to the social distancing measure. The bureau will now start working at 7am, earlier than before. However, officers admitted it was difficult to manage such large numbers of people with Covid-19 spreading.

The numbers on Wednesday were greater than those on Tuesday, following the government's announcement of the emergency decree which made many rush to report to the authorities.

The slow processing of visa renewal applications caused by social distancing on Tuesday forced some people to return to the immigration office on Wednesday.

"Why doesn't the government offer an extension application with a payment portal online?" one US citizen asked in a letter of complaint sent to the Bangkok Post before the IB announcement.

Other foreigners also have to stay in Thailand as a result of flight cancellations and lockdowns in many countries.

Click "play" to listen to Immigration looks to cut crowding and "Download" to keep this file for educational purpose.

applicants (noun): people who apply for something, such as a job or a loan of money - ผู้สมัคร,ผู้แจ้งความจำนง,ผู้ขอ

cancellation : a decision to stop something that has been arranged from taking place - การยกเลิก

compound : an area in which a group of buildings stands - บริเวณ

in person : of meeting a person directly, instead by telephone or some other way -

overcrowded (adj): with too many people or things in it - ซึ่งแออัดยัดเยียด

platform (noun): the type of computer system or the software that is used; a technology -

portal : a website that is used as a point of entry to the Internet, where information has been collected that will be useful to a person interested in particular kinds of things -