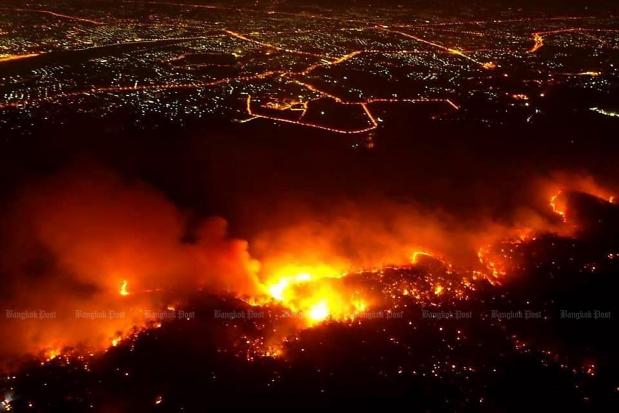 A fire in Doi Suthep-Pui National Park in Chiang Mai sent air pollution in the northern province to record highs.

Although the blaze -- which broke out on Wednesday evening -- has been brought under control, the damage it left behind is extensive, Chiang Mai governor, Charoenrit Sanguansat, said on Thursday.

He added that the bushfire also sent PM2.5 levels in the area to "record levels" of around 1,000 microgrammes per cubic metre (µg/m³), 20 times above levels considered safe by the Pollution Control Department (PCD).

Mr Charoenrit said that almost 500 local officials and soldiers from the 3rd Army Region were called in to fight the blaze.

They spent more than 14 hours bringing the bushfire under control, he said.

In Bangkok, a government spokeswoman said the prime minister was gravely concerned by the fire.

Click "play" to listen to Chiang Mai fire sends PM2.5 level to record high and "Download" to keep this file for educational purpose.

record : the best or most ever achieved - สถิติ