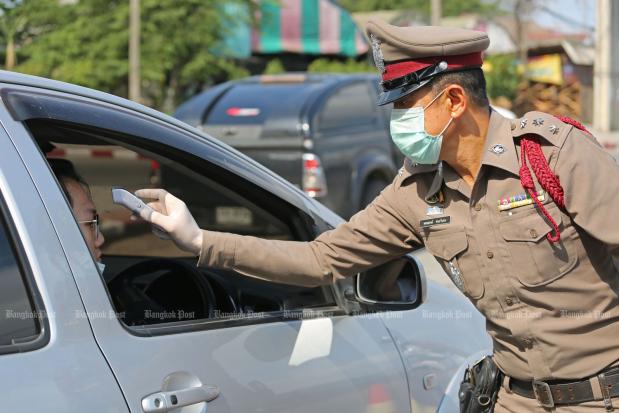 A policeman administers a fever check to a motorist on Suwinthawong Road in Bangkok on Thursday. (Photo by Varuth Hiranyatheb)

As many as 27 Bangkok police officers have contracted Covid-19 Bangkok’s police chief said on Monday.

Pol Lt Gen Pakkapong said 326 others were in quarantine waiting for test results.

The infected officers fell into two groups, he said: those who recently returned from a work tour in Spain, and those who visited two major transmission sites — the Lumpinee boxing arena and the Thong Lor entertainment complex.

One of the infected officers is the deputy traffic police chief of Taling Chan district and people close to him have already been quarantined, he added.

The Public Health Ministry is investigating how he caught the virus, but Pol Lt Gen Pakkapong insisted the deputy traffic chief had not contracted the disease from a Covid-19 screening point.

“Traffic police have not been deployed at the checkpoints,“ he said.

The total number of coronavirus cases in Thailand rose by 136 on Monday, with another two deaths.

Click "play" to listen to 27 Bangkok cops have Covid-19 and "Download" to keep this file for educational purpose.