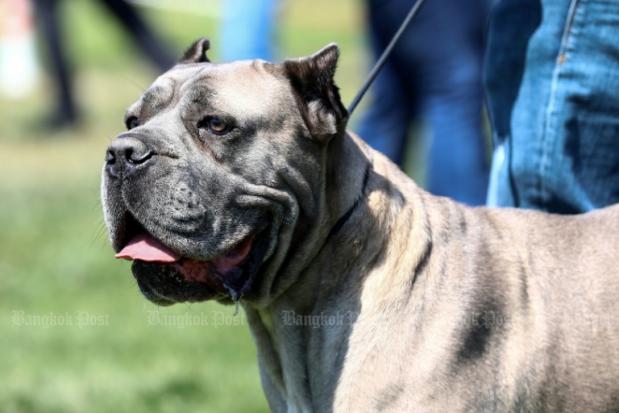 After giving chase, Washington state police were shocked to see a pit bull (similar to the one pictured) in the driver's seat and a man steering and controlling the accelerator pedal from the passenger side.

A man was arrested following a high-speed chase after police saw his pit bull behind the wheel.

The incident happened on Sunday afternoon after police received calls about a driver hitting two vehicles in an area south of Seattle and then speeding away, state trooper Heather Axtman told AFP.

She said the emergency services subsequently got multiple calls about a car traveling erratically at more than 100 miles per hour (160 kilometres per hour).

Axtman said that as officers gave chase, they got close to the car and were shocked to see a pit bull in the driver's seat and a man steering and pushing the accelerator pedal from the passenger side.

The chase ended after police used spike strips and arrested 51-year-old Alberto Tito Alejandro, who was booked on multiple felonies including driving under the influence of drugs.

"When we took him into custody... he admitted that he was trying to teach his dog to drive," Axtman said.

Click "play" to listen to US man teaching dog to drive arrested and "Download" to keep this file for educational purpose.

accelerator : the pedal in a car or other vehicle that you press with your foot to control the speed of the engine - คันเร่ง

behind the wheel (idiom): driving; being in the position of a driver holding the steering wheel - ขับรถ

erratically : not following any plan or regular pattern; that you cannot rely on; unpredictable - ไม่แน่ไม่นอน, เอาแน่เอานอนไม่ได้

felony : serious crime which can be punished by one or more years in prison - ความผิดอาญาร้ายแรง

give chase : to start to run, drive, etc. after somebody/something in order to catch them - ไล่ตาม

spike : something sharp and pointed, especially a piece of metal or wood - ตะปูยักษ์

steer : to control the direction in which something or someone moves - นำทาง ถือพวงมาลัย