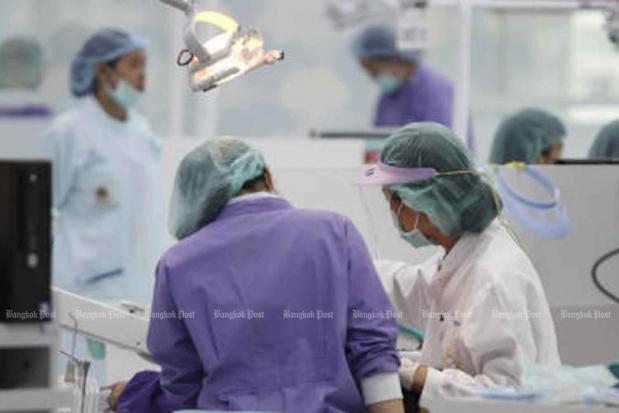 A dentist has been forced into self-quarantine after one of her patients initially denied that he had been at a Covid-19-spreading boxing event in Bangkok.

The dentist took to Facebook to write about her recent encounter.

She said a male patient went to see her at the hospital after being referred to her by a doctor.

The man had gone to the doctor complaining he had a toothache and headache.

The doctor had examined the man who showed no fever and who denied he was a Covid-19 coronavirus risk.

The dentist, meanwhile, said she discovered the man had a tooth infection.

Before removing the tooth, the dentist asked the man again if he had any contact with anyone with Covid-19 or gone somewhere where the infection was prevalent. His answer was again "no".

The dentist, having noticed the man was in a taxi uniform, inquired whether he had picked up customers from a boxing arena recently. The man said he did two or three months previously.

It was only after the dentist removed the tooth that the man admitted having gone to watch a tournament at Lumpinee boxing stadium on March 6. That event is believed to be the source of many of reported Covid-19 infections.

A quarter of those who have contracted Covid-19 have been linked to people who attended the event, according to the Public Health Ministry.

The man also told the dentist that police came looking for him and friends of his who went with him to the arena. They were all detained for quarantining except him.

According to the dentist, the man had continued to drive his taxi and pick up passengers for several days before the onset of his toothache. The dentist contacted hospital staff who took the man in for a test which turned out positive.

A spokesman of the Centre for Covid-19 Situation Administration said concealing information about a coronavirus infection carries a legal penalty.

Click "play" to listen to Patient's lie puts dentist in isolation and "Download" to keep this file for educational purpose.

admitted (verb): agreed that something is true, especially when you are unhappy, sorry or surprised about it - ยอมรับ

arena : a large area that is surrounded by seats, used for sports or entertainment - สังเวียน, สนามกีฬา

dentist (noun): a person whose job is to take care of people’s teeth - ทันตแพทย์,หมอฟัน

deny : to say that you did not do something that someone has accused you of doing - ปฏิเสธ

encounter : a meeting, especially one that happens by chance - การเผชิญหน้า

prevalent : that exists or is very common at a particular time or in a particular place - ที่พบได้บ่อยๆ, แพร่หลาย

referral (noun): the act of sending somebody who needs professional help to a person or place that can provide it - การส่งต่อ (ผู้ป่วย)