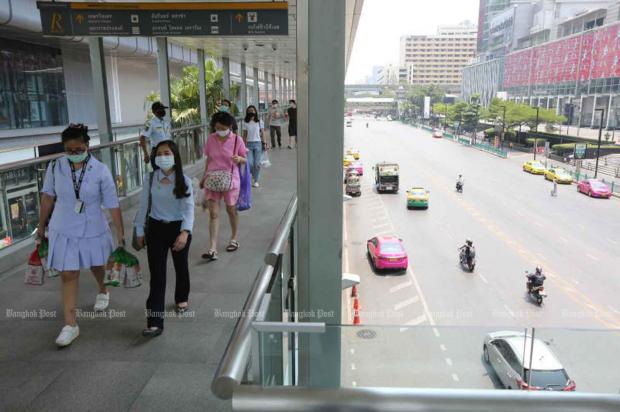 There were 120 new local cases of Covid-19 announced on Wednesday, raising the total to 1,771, while the death toll went up by two to 12.

Dr Taweesin Visanuyothin, spokesman of the Centre for Covid-19 Situation Administration, said a Thai man, 79, died in a southern border province. He also suffered from diabetes and chronic renal failure. The man attended a wedding party in Malaysia on March 7 and fell sick on March 20.

The other death was a businessperson aged 58 who returned from Britain.

Of the 120 new cases, 38 were had been in close contact with previous patients, 16 attended religious ceremonies in Indonesia and 14 had risky jobs, working in crowded places or closely with foreigners.

Eleven visited entertainment places, six were Thai returnees from other countries, two were visiting foreigners, one was a medical official, one visited a boxing stadium and one attended a religious ceremony in Malaysia. Officials were investigating 30 other cases.

As Bangkok has the highest number of local cases, at 850, Dr Taweesin said people who were travelling in the capital were at risk of contracting the disease from people who had been in earlier contact with the confirmed local cases.

failure : the fact of something not working or stopping working -

renal (adj): relating to or involving the kidneys, the two organs in the body that remove waste products from the blood and produce urine - เกี่ยวกับไต