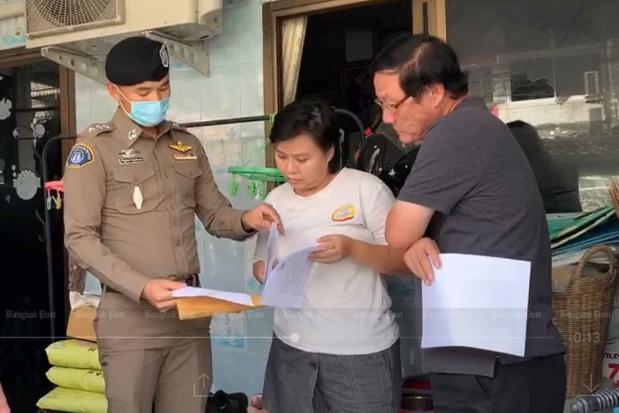 Police show the arrest warrant to a woman accused of allegedly forcing her toddler to swallow bleach to make him look sick for an online advertisement selling her products. (Crime Suppression Division photo)

Police have found more evidence to disprove a claim by a mother accused of forcing her two-year-old son to swallow bleach that the boy is her biological child, police said on Monday.

The mother allegedly forced her son to swallow bleach to make him look sick for an online advertisement selling her products.

DNA test results expected next week may lead to human trafficking charges being pressed against the mother as well, the Crime Suppression Division (CSD) chief said on Monday.

The new evidence is a Line application chat history between Nittha Wongwan, 29, the mother, and the biological mother of a four-year-old girl who was adopted by Ms Nittha before she fell ill with similar symptoms to the two year-old-boy.

The girl had died while the boy was placed in a shelter for children in Pathum Thani.

In the chat, Ms Nittha, who was arrested last week, had revealed that she was not the biological mother of the boy, said police.

Ms Nittha has admitted to online fraud but denied a charge of attempted murder.

A check into Ms Nittha's financial history found more than 20 million baht in her bank accounts.

The police were also checking whether Ms Nittha had obtained life insurance for the boy and the girl and if the answer is yes, that could be treated as a motive.

Ms Nittha was in 2018 sentenced to three years in prison in a fraud case involving online products sales, police said.

Click "play" to listen to Line chats undermine 'bleach mum' and "Download" to keep this file for educational purpose.

adopt : to take someone else’s child into your family and legally make him or her your own child - รับเลี้ยงเป็นลูก

biological mother : the real mother; the mother whose egg contributes genes to a baby -

fraud : the crime of intentionally deceiving someone or cheating in order to gain an advantage or benefit - การฉ้อโกง การหลอกลวง เล่ห์เพทุบาย

life insurance (noun): money paid to people in your family if and when you die - การประกันชีวิต

shelter : a place where people are protected from danger or bad weather; a temporary place to stay - ที่หลบภัย  ที่พักชั่วคราว

swallow : to make food or drink go from your mouth down through your throat and into your stomach - กลืน