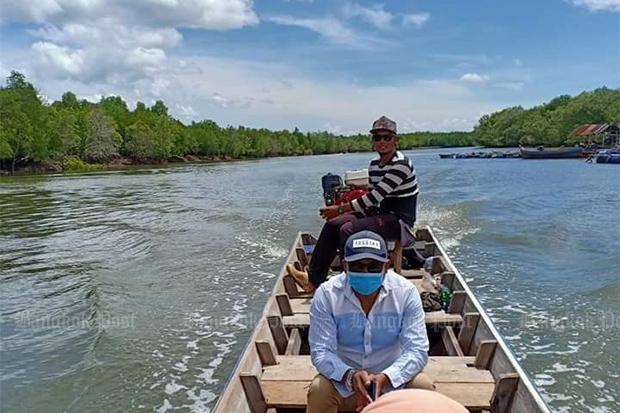 Chebilang mayor Mahmadneesum Bilungload rides a long-tailed boat from Chebilang canal to the Andaman Sea in Muang district of Satun province on Saturday to track the escape route of a shark that bit a boy's foot. (Photo from Chebilang Municipality Facebook account).

A cash reward for the live capture of a shark that bit a boy's foot has angered Natural Resources and Environment Minister Varawut Silpa-archa, who criticised the local politician behind it.

"Don't offer a bounty for a shark or support the hunt for a reward," the minister said on Sunday.

Mr Varawut's comment came after Chebilang mayor Mahmadneesum Bilungload promised to give 1,000 baht in cash to anyone who captured the shark and provided evidence it was the one that bit Harafat Limapicharsakul, 12, on Thursday.

The boy's left foot was bitten by a shark while he was swinging his legs in a canal at Chebilang pier in Muang district of Satun province.

Harafat received 50 stitches at a hospital before he was allowed to go home.

The pier where the shark attack took place is not far from the mouth of the canal which runs into the Andaman Sea.

The mayor said the shark might have lost its way due to high seas in the Andaman, or come into the canal looking for food.

Local officials posted a Facebook message saying fishing was still allowed -- but swimming was not. "Do not swim in the canal!!!," the message said.

The environment minister suggested that warning signs and announcements were a better way to alert swimmers of shark attacks in the area.

bite (verb): (bite, bit, bitten) to use your teeth to cut into or through something - กัด

bounty : money given as a reward, of for helping catch or kill a criminal - เงินรางวัล

capture : to catch someone or something; to take someone as a prisoner - จับ, จับกุม

pier : a platform sticking out into water which people walk along or use when getting onto or off boats - ท่าเรือชนิดยื่นออกไปในน้ำ, สะพานที่ยื่นออกไปในน้ำ

reward : money that someone receives for finding and returning something or for helping the police - รางวัล

stitch : a short piece of thread, etc. that doctors use to sew the edges of a wound together - รอยเย็บ

swing : to move or make something move with a wide curved movement - แขวน