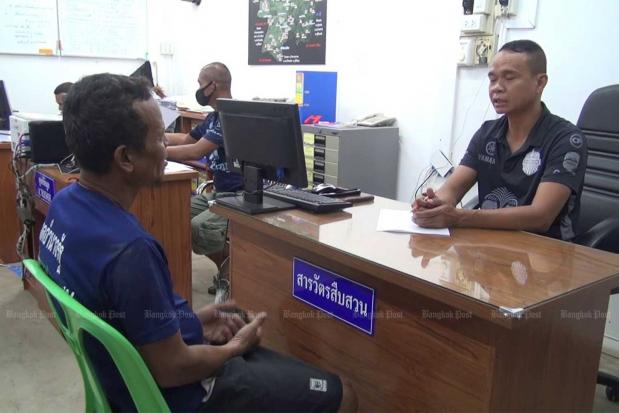 The 50-year-old suspect is interrogated by a police officer at Phlapphlachai police station in Buri Ram province, accused of raping a 9-year-old girl he claimed had fallen in love with him. (Photo: Surachai Piragsa)

BURI RAM: A 50-year-old man charged with raping a 9-year-old girl has told police the child was in love with him.

The man, named only as Prawit by police, had only recently arrived from Bangkok to stay at a friend's house.

He was arrested in a field not far from the village on Thursday, following a complaint by the girl's grandfather.

During interrogation, the suspect admitted to having sexual intercourse with the 9-year-old girl in a hut near the village on June 21, according to police.

He said he had not lured or forced her into having sex with him. He claimed the girl fell in love with him.

Police said the girl was taken to hospital for an examination. Officers would question the child in the presence of welfare officials.

Click "play" to listen to Man held for child rape, claims girl fell in love with him and "Download" to keep this file for educational purpose.

force (verb): to make someone do something that they don't want to do - บังคับ

lure (verb): to persuade someone to do something by making it seem very attractive - หลอกล่อ

presence : when someone or something is in a place - การอยู่ในสถานที่หนึ่ง (ของบุคคล)