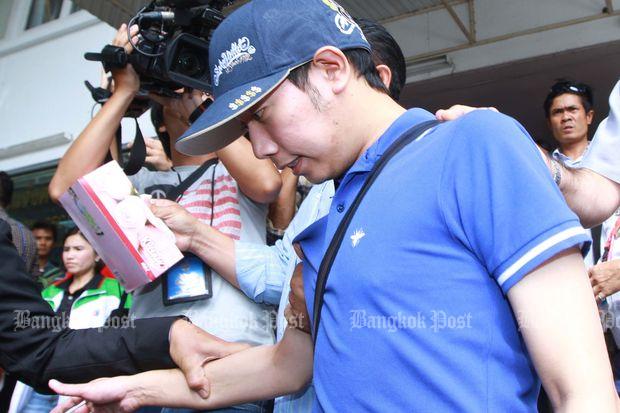 Vorayuth Yoovidhya, a suspect in a hit-and-run case, is brought to the Police General Hospital to undergo a blood test on Sept 4, 2012. (Bangkok Post file photo)

Pressure is mounting on the police in the hunt for Red Bull scion Vorayuth "Boss" Yoovidhya, who is wanted over a 2012 hit-and-run case.

The prosecution warned it is the police's responsibility to speed up locating the suspect before the case expires.

Mr Vorayuth, 35, who has been seen at public sporting events and elsewhere abroad, is accused of being behind the wheel when his Ferrari hit and killed Pol Sgt Maj Wichian Klanprasert, a motorcycle policeman, on Sukhumvit Road in Bangkok, on Sept 3, 2012.

The police have seven years left to track Mr Vorayuth before the statute of limitations for the most serious charge, reckless driving causing death, expires on Sept 3, 2027.

The speeding charge was dropped when the one-year statute of limitations expired in 2013 and a second charge -- failing to stop and help a crash victim -- expired on Sept 3, 2017.

Previously, a National Anti-Corruption Commission (NACC) investigation found that there had been an intention to exempt Mr Vorayuth from prosecution on charges of drug abuse and speeding by officers at Thong Lor police station.

It was not until April 27, 2017, that prosecutors finally charged him with reckless driving causing death and failing to help a crash victim.

Click "play" to listen to Police told to hurry up and find 'Boss' and "Download" to keep this file for educational purpose.

exempt : not having to follow a rule or obligation or make a payment - ยกเว้น

extradite : to officially send back someone who has been accused or found guilty of a crime to the country where the crime was committed for a trial - ส่งตัวกลับ

hit-and-run : (of a road accident) caused by a driver who does not stop to help - ที่ชนแล้วหนี

prosecution : the person or organisation that tries to prove in court that someone has committed a crime - อัยการ

prosecution : the process of accusing someone of a crime and asking a court of law to judge them - การดำเนินคดีตามกฎหมาย

reckless (adj): doing something dangerous and not worrying about the risks and the possible results - ชะล่าใจ, เสี่ยง, ไม่ยั้งคิด

responsibility : a moral duty to behave in a particular way - ความรับผิดชอบ