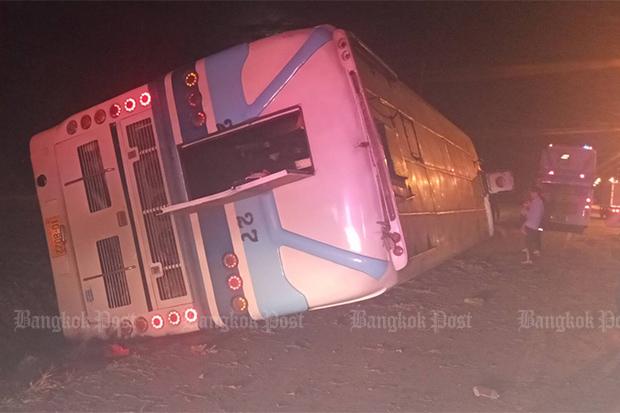 NAKHON RATCHASIMA: An air-conditioned bus bound for Bangkok from Khon Kaen crashed onto its side on the main highway early on Friday morning, and the driver admitted he was tired and just fell asleep.

Police said the Charn Tour bus overturned on the Mittaphap Highway about 2.30am. Several passengers received minor injuries, but the exact number was not reported.

The bus had 20 passengers when it left Khon Kaen.

Police said the driver, whose name was not given, admitted he was tired and that he fell asleep at the wheel.

It was the second accident involving an interprovincial bus this week.

On Monday, a bus to Nakhon Si Thammarat from Bangkok crashed into a ditch of the main southern highway in Bang Saphan district of Prachuap Khiri Khan. The accident occured about 11pm. The driver claimed he swerved to avoid a cyclist who cut across the road in front of him. Five passengers received minor injuries.

Click "play" to listen to Long-distance bus crashes as driver falls asleep and "Download" to keep this file for educational purpose.

admitted (verb): agreed that something is true, especially when you are unhappy, sorry or surprised about it - ยอมรับ

ditch : a long narrow open channel dug into the ground usually at the side of a road or field, which is used especially for supplying or removing water, or for dividing land - คูน้ำ

interprovincial (adj): travelling around different provinces of the country -

minor : not important; small; having little influence or effect - เล็กน้อย