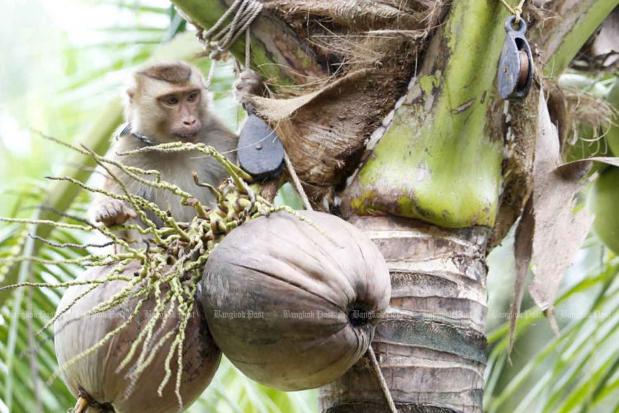 Thailand does not use monkeys to harvest coconuts on an industrial scale for its export industry, said Commerce Minister Jurin Laksanawisit on Monday.

Mr Jurin was denying accusations made by People for the Ethical Treatment of Animals (Peta), an activist group, which claimed the monkeys trained by Thai farmers to harvest coconuts are often abused. Peta has called for a boycott of Thai coconut products.

He admitted that at one stage farmers did train monkeys to harvest coconuts. They still do, the minister said, but only on a small scale as they are intended as tourist attractions.

"Coconut-picking by monkeys on an industrial scale no longer exists in Thailand," he stressed.

Peta called for a boycott of Thai coconut products after it accused Thai farmers of snatching pig-tailed macaques from the wild to be used as "coconut picking machines".

The animal rights group claimed that each macaque is forced to pick up to 1,000 coconuts a day, and the allegations have driven major Western retailers to pull Thai coconut products off their shelves.

Niran Wongwanit, 52, a coconut farmer and a monkey trainer in Surat Thani, said Peta's campaign to boycott Thai coconuts was not fair to Thai farmers, saying that the use of monkeys in harvesting is a practice which dates back more than 100 years.

Mr Niran said before they had the monkeys, growers would climb up the coconut trees themselves. However, as most people aren't as efficient at the work as monkeys and climbing such tall trees poses a risk to the farmers, they began taking in monkeys from the wild.

"These days, the monkeys are bred. Once they reach a certain age, they are trained before they are sent to coconut farms across the country," he said.

Click "play" to listen to Minister denies 'industrial' monkey use and "Download" to keep this file for educational purpose.

abuse : to use something in a bad, dishonest, or harmful way (an abuser is a person who does this) - ใช้ในทางที่ผิด

boycott : a refusal to take part in an activity or to buy a product as a way of expressing strong disapproval - การคว่ำบาตร

efficient : effective and well organised (the opposite is inefficient) - มีประสิทธิภาพ

fair : acceptable and appropriate in a particular situation - เท่าเทียม, ยุติธรรม

macaques (noun): a type of monkey that lives in Africa and Asia - ลิงแสม

scale : the size or extent of something, especially when compared with something else - ขนาด, ระดับ

train (verb): to teach people how to do a certain job or activity - ฝึกอบรม, ฝึก, อบรม