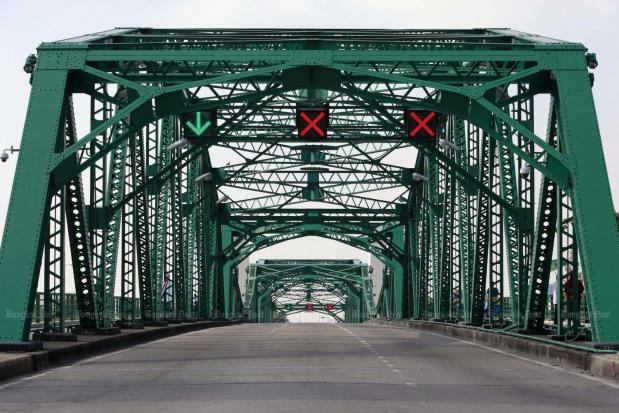 The Memorial Bridge, or Saphan Phut, in October 2015. The bridge, which was officially opened on April 6, 1932, is set to undergo a major renovation to become a new Bangkok landmark to attract tourists. (Photo by Apichart Jinakul)

The government is floating an idea to make the 88-year-old Memorial Bridge, or Saphan Phut, into a new landmark for Bangkok to attract tourists from around the world.

The idea was unveiled on Tuesday by Pathom Chaloeywares, director-general of the Department of Rural Roads.

The premier also ordered the department to find out how to restart the drawbridge practice. In the old days, Saphan Phut was able to lift in parts to let large ships pass. This stopped several years ago.

Mr Pathom said the drawbridge feature and redevelopment of surrounding land could make the area become popular with tourists.

The consultant project will take one year to complete, and the restoration is expected to be finished by the end of 2023.

Built in 1929 during the reign of King Rama VII, to mark Bangkok's 150th anniversary, the bridge was the second bridge connecting Bangkok and Thon Buri province.

Click "play" to listen to Memorial Bridge to become major attraction and "Download" to keep this file for educational purpose.

attraction : something that creates interest and brings people to see it - การดึงดูดความสนใจ

consultant : a person who knows a lot about a particular subject and is employed to give advice about it to other people - ผู้ให้คำปรึกษา

drawbridge (n): a bridge that can open to allow tall ships or boats to pass -

reign (noun): a period of time during when a king or queen rules a country - ช่วงเวลาครองราชย์

restoration : the work of repairing and cleaning something, etc. so that its condition is as good as it originally was - การซ่อมแซม,การการบูรณะ, การกลับสู่สภาพปกติ

unveil : to announce something that was not known before - เปิดเผยข้อมูล