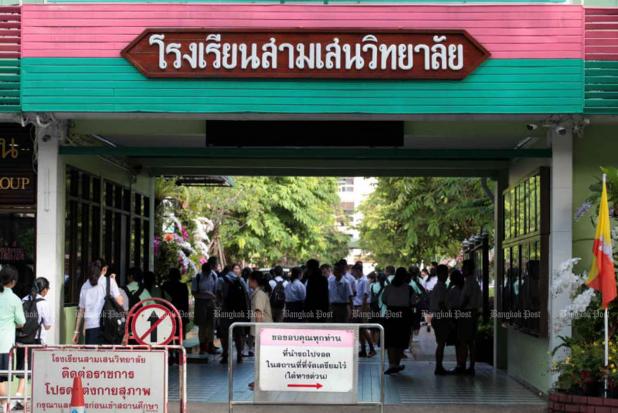 Two schools in Bangkok, Samsenwittayalai and Sainampeung, will be closed on Wednesday as a result of coronavirus fears.

Samsenwittayalai School announced its closure on its Facebook page on Tuesday, saying the decision came after its board learned that a Mathayom 2 student and his family stayed at the same hotel in Rayong where a visiting Egyptian soldier who later tested positive for Covid-19 was staying.

On July 8, an Egyptian military delegation arrived at U-Tapao airport in Rayong and stayed for a few days, including a shopping trip, before going back home.

One of the soldiers was later found to be infected with the coronavirus.

According to Thai Airways International (THAI), seven ground crew members have been placed under a 14-day quarantine period and will be tested for Covid-19, after coming into contact with the Egyptian military delegation.

Similarly, Sainampeung School announced on Facebook that it will be closed from today until Friday after the daughter of a Sudanese diplomat living in a condominium on Sukhumvit 26 was found to be infected with the virus.

Students will learn through the internet at home, it said.

In other news, the Office of the Basic Education Commission (Obec) plans to ask the CCSA to consider scrapping social distancing policies in schools with no recorded Covid-19 infections.

delegation : a group of people chosen or elected by a group to represent them - คณะผู้แทน, คณะบุคคลที่เป็นตัวแทนของคนกลุ่มใหญ่

record (verb): to make a written account of something that is kept so that it can be looked at and used in the future - บันทึก, รายงาน