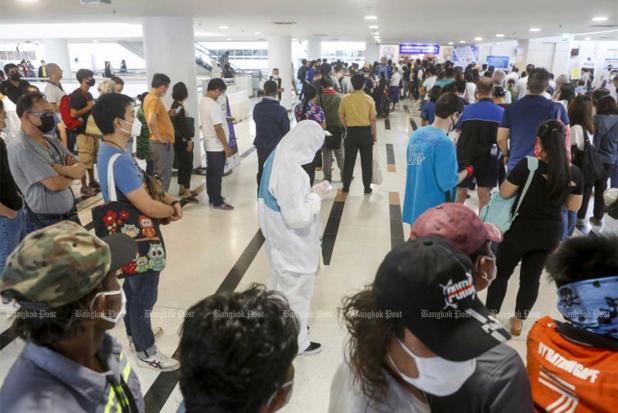 Long queues of foreign nationals at the Immigration Bureau office at the Government Complex in Nonthaburi on March 23, seeking visa extensions after the Covid-19 pandemic disrupted their travel plans. The bureau later declared a “visa amnesty” until July 31 to reduce the risk of crowding at its offices. (File photo by Pattarapong Chatpattarasill)

Foreign tourists who are unable to leave Thailand would be given a grace period from Aug 1 to Sept 26 to apply to stay for a specified period, said the bureau. However, if they do not obtain extensions and are still in the country after Sept 26, they would face legal action and be blacklisted.

Foreigners should contact the bureau as soon as possible to prepare for their next steps as the Sept 26 deadline approached.

Foreign visitors must submit necessary documents when seeking to renew short-term visas, which will be granted for 30 days.

"If they are unable to return because there are no flights or due to lockdown measures in their countries, they must submit proof. The granting of a short-stay visa will be made on a case-by-case basis," an immigration official said during a visit to Phuket, a province with a high number of stranded foreigners.

Click "play" to listen to Foreigners can apply for visa extensions after July 31 and "Download" to keep this file for educational purpose.

blacklist (verb): to put the name of a person, a company, a product or a country on a blacklist (a list of the names of people, companies, products or countries that an organization or a government considers unacceptable and that must be avoided) - ใส่ในบัญชีรายชื่อของคนที่ทำไม่ดี

documents (noun): papers or sets of papers with written or printed information, especially of an official type - เอกสาร

proof : information, documents, etc. that show that something is true - การพิสูจน์