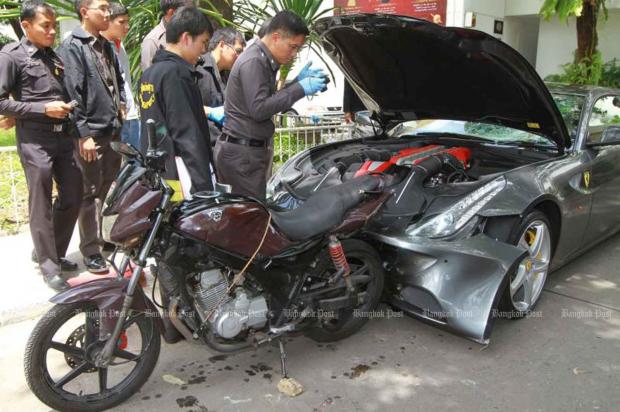 A Chulalongkorn scientist who concluded that Red Bull scion Vorayuth "Boss" Yoovidhya drove his car at 177km/h in the 2012 hit-and-run case is sticking to his evidence.

Sathon Vijarnwannaluk, a physics lecturer at the university's Faculty of Science, was a member of the original evidence team and has told a talk show on Thairath TV that he is sceptical about police officers' new conclusion that the Red Bull heir's Ferrari was not exceeding 80km/h.

Soon after the accident, the lecturer said he examined CCTV footage taken from a showroom in Soi Sukhumvit 53, around 100 metres from the crash scene.

Since that was the only footage available, he said he decided to calculate the car's speed based on the moment it passed the camera.

Mr Sathon said the car seemed to be travelling very fast since it appeared on the screen at 05.34.17 and left before 05.34.18. The distance between the two points was about 31 metres.

He admitted he had not been able to produce a precise calculation at the time, so he merely concluded the car had travelled around 30 metres in less than one second.

He therefore concluded the car must have travelled at a speed faster than 108 kilometres per hour.

In a phone interview with the Bangkok Post, he said his calculation was based on the time which appeared on the CCTV.

Two teams of specialists calculated the car's speed, he said, and each could have produced a different result depending on the starting point it used.

Nevertheless, Mr Sathon said his team concluded the Ferrari had travelled at 177km/h and the other team 174km/h.

Two new witnesses, police majors, inspected the damage to the Ferrari and the victim's motorcycle.

They compared it to other accidents and claimed the Ferrari had not exceeded 80km/h.

Click "play" to listen to Scientist sticks by 'Boss' Ferrari speed and "Download" to keep this file for educational purpose.

calculate : to discover a number or amount using  mathematics - คำนวน

claim : to say that something is true although it has not been proved and other people may not believe it - อ้าง

exceed : to be more than something; to go beyond a limit - เกินกว่าที่กำหนด

sceptical : having doubts about something that other people think is true or right - สงสัย

showroom (noun): a place where cars are shown to customers -

specialist : a person who is an expert in a particular area of work or study - ผู้ชำนาญเฉพาะทาง

stick to : to refuse to change your mind about something even when other people are trying to persuade you that you are wrong - ยึดมั่น