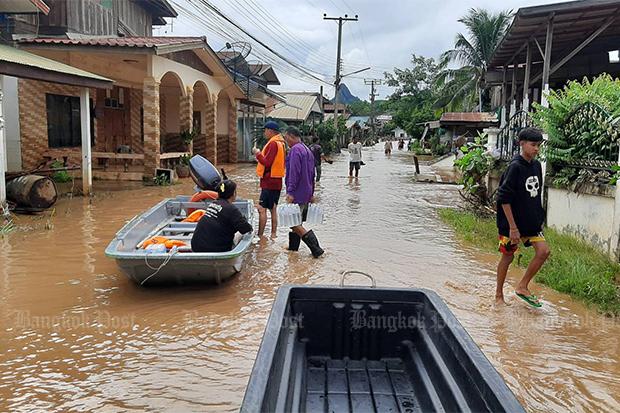 The water level in a community in Muang district of Loei had subsided on Monday, after it was hit by a flash flood shortly before dawn on Sunday. (Photo: Loei Public Relations Office Facebook account)

Chiang Mai and Loei provinces were hit by storm Sinlaku as it moved into Thailand, with heavy rain and flash-floods expected until at least Tuesday.

Officials denied reports that the sudden flood was caused by a leak at Mae Kuang Dam in Doi Saket district. The flooding was due to damage to a small check-dam in San Sai, built to slow the river's flow, officials said.

In Loei, torrential rain flooded communities in at least three districts on Sunday morning, but the water was receding on Monday as the level of the Loei River dropped.

Loei was the province most damaged by flooding on Sunday, with about 700 households affected.

Three northeastern and six northern provinces, including Chiang Mai and Loei, bore the brunt of the storm.

The Meteorological Department issued another weather alert, but said Sinlaku was weakening as it entered Nan on Monday morning. Heavy rain was expected in at least 44 provinces, most of them in the northern and northeastern regions, until Tuesday.

bear the brunt of (idiom): to receive the main force of something unpleasant - ได้รับผลกระทบที่รุนแรง

dam : a wall built across a river to stop the water from flowing, especially in order to create a lake or to help to produce electric power - เขื่อน

leak : (of a liquid or gas) flowing out of a hole or crack - การรั่วไหล

overflow : (of a river or body of water) to flood the land next to it - เอ่อล้น, ไหลล้น