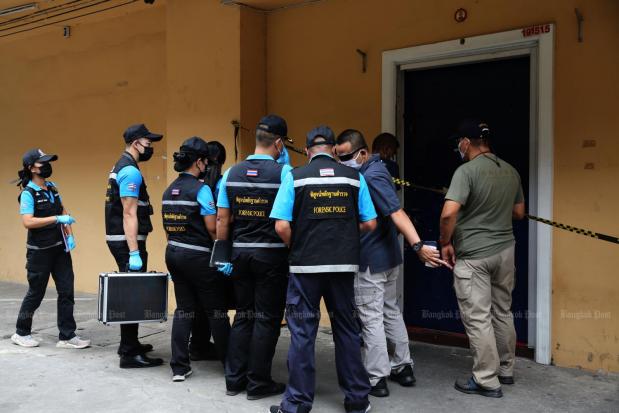 Police investigators and forensic experts arrive to collect evidence at a gambling den where four people, including a police major, and there other people were killed in a shooting in Yannawa district of the capital on Monday night.  Wichan Charoenkiatpakul

Prime Minister Prayut Chan-o-cha has vowed he will "spare no one" if Monday night's shooting in Bangkok involved illegal police activity in connection with underground gambling.

Prayut was reacting to the fatal shooting of Pol Maj Watthanaset Samniangprasert, an inspector at Samae Dam police station in Bang Bon district, and three other people, one of them a woman, at a gambling den in Yannawa district.

Three of those killed were shot by a losing gambler, who was in turn killed by another man now being hunted by police.

The PM said any police officers who abused their authority in connection with illegal casinos would be punished.

"Yes, the prime minister has total authority to oversee the police. The bad eggs will face punishment. No one will be spared," Gen Prayut said.

The shooter was then himself shot dead by another man, who ran away, Pol Lt Gen Pakapong said.

The den was on the ground floor of a four-storey commercial building surrounded by security cameras about 300 metres off Rama III Road in Soi 66.

There were about 60 gamblers in the building at the time of the shooting.

Pol Lt Gen Pakapong said on Tuesday Pol Maj Watthanaset was not in the room on duty and had not been assigned to bust the den.

Click "play" to listen to Prayut warns police after gambling den shootout and "Download" to keep this file for educational purpose.

abuse authority : to use of power in a bad, dishonest or unlawful way - ใช้อำนาจในทางที่ผิด

bad egg (n): a person who is bad or dishonest -

superior : someone who holds a higher job or position than you do - ผู้บังคับบัญชา