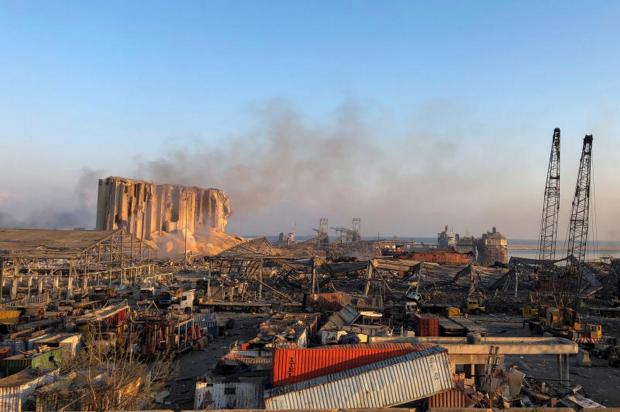 The aftermath at the site of Tuesday's blast in Beirut's port area, Lebanon.(Photo: Reuters)

The second blast sent an enormous orange fireball into the sky, immediately followed by a shockwave that flattened the port and shattered windows across the city.

The explosions were heard in Nicosia, 240 kilometres away in Cyprus.

Bloodied, dazed and wounded people stumbled among the glass shards and burning buildings in central Beirut.

Around 4,000 people were hurt by the blasts, with injuries recorded right across the city.

Lebanon already has an economic crisis that has left more than half of the population in poverty. The situation has been worsened in recent months by the coronavirus pandemic.

Prime Minister Hassan Diab said 2,750 tonnes of the agricultural fertiliser ammonium nitrate that had been stored for years in a portside warehouse had blown up, sparking "a disaster in every sense of the word".

Click "play" to listen to Two huge Beirut explosions kill 78 and "Download" to keep this file for educational purpose.

dazed : very confused and unable to think clearly because you are shocked or have hit your head - งงงวย, ตกตะลึง

fertiliser : a natural or chemical substance which is spread on the land or given to plants, to make plants grow well - ปุ๋ย

poverty : the condition of being extremely poor - ความจน

shockwave : a movement of very high air pressure that is caused by an explosion, earthquake, etc. - คลื่นกระแทก