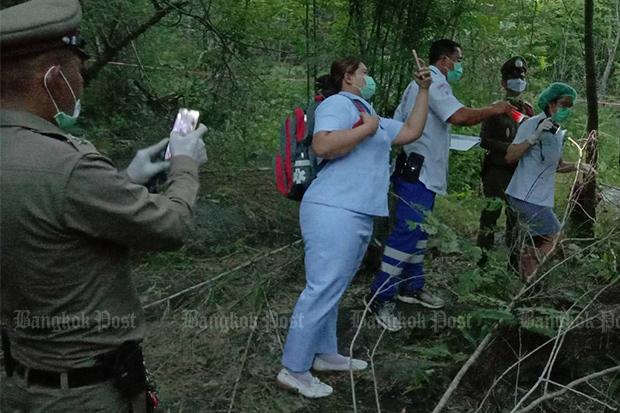 Police and medical staff from Sai Yok Hospital take evidential photos at the tree where a man was found hanged in the forest in Sai Yok district of Kanchanaburi on Tuesday. (Photo: Piyarach Chongcharoen)

KANCHANABURI: An unidentified man was found hanged in the forest behind Nam Tok railway station in Sai Yok district of this western border province on Tuesday.

Police, a doctor from Sai Yok Hospital and rescuers from a local charity foundation walked about 1 kilometre into the forest behind the railway station after the discovery was reported about 4.10pm.

They found a man hanging by the neck from a big tree, about 2.5 metres above the ground. He was about 60 years old, wearing a pair of blue jeans, a grey T-shirt, a pair of black canvas shoes and a blue cap. A black bag was found near the body.

He was believed to have been dead about four hours.

No identification documents were found on him. There was no evidence of violence.

A villager said he found the body hanging from the tree while looking for bamboo shoots in the area. Shocked, he ran out of the forest and informed the police.

The body was sent to Sai Yok Hospital for an autopsy.

bamboo shoot (noun): the part that grows up from the ground when a bamboo tree starts to grow - หน่อไม้

forest : an area with trees, animals and plants - ป่า

hanging : when someone dies by tying a rope around their neck strangling them - ฆ่าด้วยการแขวนคอ

rescuers (noun): people who save someone from a dangerous or unpleasant situation - ผู้ช่วยชีวิต