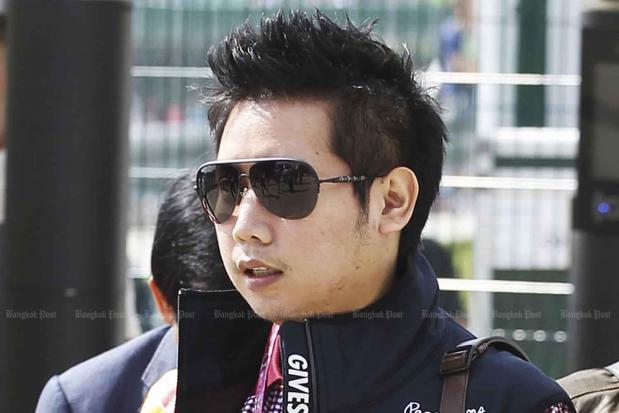 Every expert who has calculated the speed Vorayuth "Boss" Yoovidhya was driving at in the deadly hit-and-run case believes he was speeding, a police panel said on Thursday.

Thong Lor police are expected to next week forward a new report so that prosecutors can consider new charges against the Red Bull scion, said the deputy chairman of the panel.

Ten witnesses who are experts in assessing car speeds and four other drugs experts had been questioned and their statements are included in the report that was likely be submitted to prosecutors next week, the officer said.

Mr Vorayuth, 35, was driving his Ferrari when it hit and killed Wichian Klanprasert, 47, as the police officer was riding his motorcycle in Sukhumvit Road in the early hours of Sept 3, 2012.

He originally faced three charges but delayed answering those charges for so long that the statute of limitations on two of them expired.

Four car speed experts, including those previously asked to participate in the investigation, were asked to again estimate how fast he had been driving.

All said he must have exceeded the legal speed limit and their estimations ranged from 125kph to 177kph. They also insisted these calculations were accurate.

The panel wrapped up its investigation by submitting its findings to national police chief Chakthip Chaijinda.

Another part of the report deals with alleged misconduct committed in the investigation so far by 22 police officers.

The panel has therefore requested that a probe be launched against these officers to determine whether disciplinary action was necessary.

Click "play" to listen to Experts agree 'Boss' really was speeding and "Download" to keep this file for educational purpose.

accurate : correct, exact and without any mistakes - ถูกต้อง, แม่นยำ

disciplinary action : punishment of people who do not obey the rules - การลงโทษเนื่องจากการฝ่าฝืนวินัย หรือระเบียบ

exceed : to go beyond an official limit; to be greater than a number or amount - เกินปริมาณ

panel (noun): a group of specialists who give their advice or opinion about something; a group of people who discuss topics of interest at a meeting or on television or radio - ผู้ร่วมอภิปราย