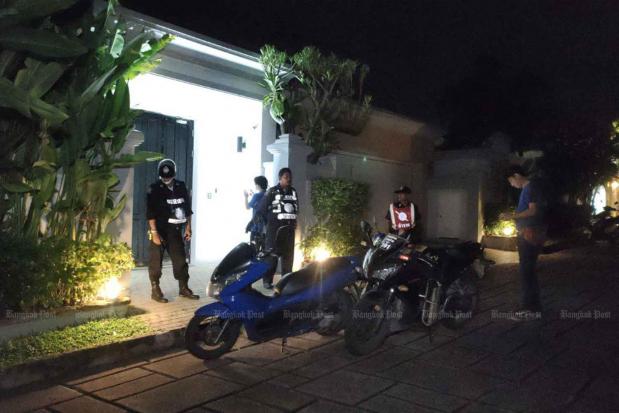 Police at the scene of the holdup at a luxury home in a gated Pattaya housing estate on Monday night. The robbers stole at least 10 million baht in cash and valuables from an unspecified number of Chinese in the house. (Photo: Chaiyot Pupattanapong)

Five armed men forced their way into a Pattaya home on Monday night and robbed Chinese tourists of cash and valuables worth about 10 million baht, police said.

The hold-up in the Siam Royal View housing estate in Bang Lamung district was reported to local police about 10pm.

Siam Royal View is situated on a hill and comprises luxury homes costing more than 10 million baht each.

The victims told police there were five armed men. In total, the gang stole about 10 million baht from them.

The men also ransacked the house in search of more valuables before fleeing through the back door.

It was not clear how many Chinese people were in the house at the time and who owned the house.

Police were still questioning the Chinese victims with the help of interpreters.

Police said they would examine recordings from security cameras at the housing estate for clues to the robbers.

hold-up : an act of stealing from a bank, etc. using a gun -

housing estate : an area containing a large number of houses or apartments built close together at the same time - หมู่บ้านจัดสรร, บ้านจัดสรร

luxury : the best and most expensive of something - ที่หรูหรา

ransack : to go through a place stealing or damaging things - ปล้นสะดม