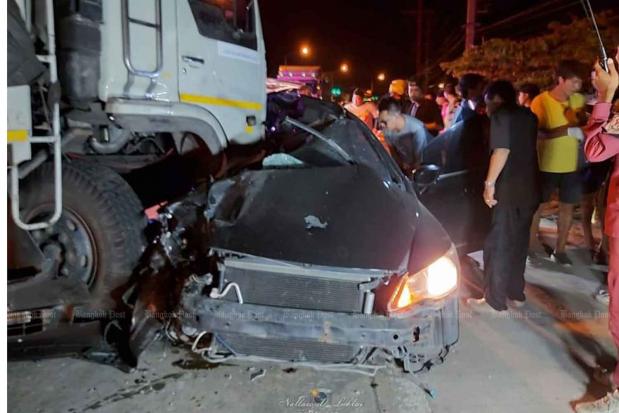 Rescuers with the wrecked car and its fatally injured occupants, after it collided with an 18-wheel articulated truck in Ayutthaya's Nakhon Luang district on Tuesday night. (Photo: Sunthorn Pongpao)

AYUTTHAYA: Three local government officials returning home from a birthday party were killed when their car and an 18-wheel lorry crashed on Tuesday night.

The driver of the lorry told police the oncoming car swerved across the centre line and hit his truck.

Two of the men died in the car. The other was seriously injured and died on the way to hospital.

They were returning home from a friend's birthday party.

Click "play" to listen to Local leaders killed in Ayutthaya car crash and "Download" to keep this file for educational purpose.