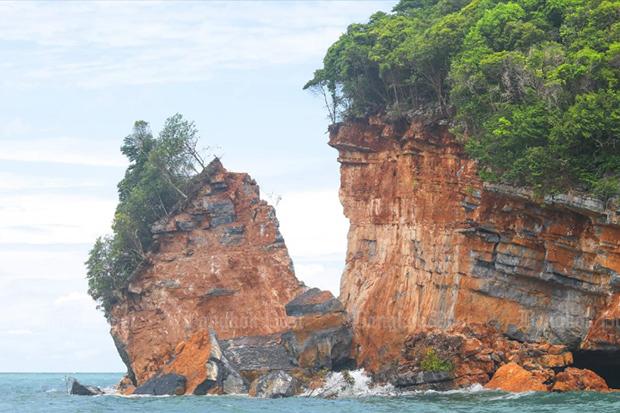 A large section of Ko Hintaek in the Mu Ko Ang Thong National Park has split off from the rest of the island. (Photo by Supapong Chaolan)

SURAT THANI: A large section of an island in the Mu Ko Angthong National Marine Park has split off from the main island, probably because of heavy rain and strong waves.

Mu Ko Angthong is a marine national park in the Gulf of Thailand in Ko Samui district. The park covers a total area of 102 square kilometres and comprises 42 islands. The islands in the Mu Ko Angthong National Marine Park are made of limestone that dates from about 260 million years ago.

The southwest part of Ko Hintaek, one of the park's islands, broke off from the rest of the island -- about 15-20% of the total area.

Park chief Piya Nunil said the break might have been caused by erosion from heavy rain and strong ocean waves.

A warning his been issued for boats to keep a safe distance from Ko Hintaek for safety reasons, as chunks of limestone are still breaking off and falling into the sea, Mr Piya said.

Click "play" to listen to Storm breaks off large section of island and "Download" to keep this file for educational purpose.

chunk : a thick solid piece that has been cut or broken off something - ก้อนหนา

distance (noun): the amount of space between two places or things; being far away - ความห่างไกล

limestone (noun): a type of white stone that contains calcium, used in building and in making cement - หินปูน

section : any of the parts into which something is divided - ส่วน