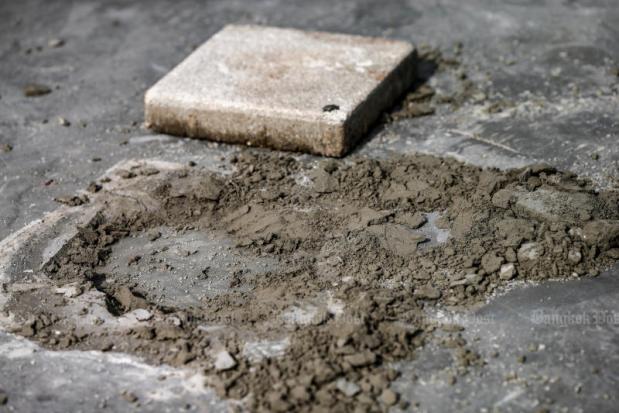 A close-up view of the spot where a plaque placed by Thai pro-democracy protesters near the Grand Palace in Bangkok that declared that Thailand belongs to the people and not the king, is seen after the plaque was removed, in Bangkok, on Monday. (Reuters photo)

The new plaque symbolising democracy that was installed on Sunday morning by protesters at Sanam Luang has been removed overnight.

The plaque was embedded in cement at Sanam Luang in a ceremony led by protest leader Parit "Penguin" Chiwarak at 6.39am on Sunday to mark "a new era of the people's power" and declare "Thailand belongs to the people."

The plaque was intended to replace an old one commemorating Siam's transition from absolute monarchy to constitutional democracy in 1932. The old plaque mysteriously disappeared in 2017 and was replaced by one bearing a pro-monarchist slogan.


After a ceremony to install the new plaque on Sunday, the protesters marched to an area outside the Supreme Court and handed over a petition containing their demands.

Mr Parit then called off the rally and declared a new demonstration would be held outside Parliament on Thursday.

The Bangkok Metropolitan Administration reportedly closed the Sanam Luang gates at 10pm on Sunday and opened them again on Monday at 5am. That was when the new pro-democracy plaque was found to have been removed. The spot where the plaque was planted had been covered up with cement that still looked wet.

"I’ve received a report that the plaque is gone but I don’t know how and I don’t know who did it," Bangkok’s Deputy Metropolitan Police Bureau chief Piya Tawichai told Reuters.

Police and others said on Sunday the installation of the new plaque was a violation of certain laws.

Click "play" to listen to Protesters' new plaque removed and "Download" to keep this file for educational purpose.

absolute monarchy : a system in which a king or queen has unlimited powers - ระบอบสมบูรณาญาสิทธิราช

cement : a grey powder made by burning clay and lime that sets hard when it is mixed with water. Cement is used in building to stick bricks together and to make very hard surfaces - ปูนซีเมนต์

monarchist (n): a person who believes that a country should be ruled by a king or queen -

petition : a document signed by a large number of people demanding or requesting some action from the government or another authority - การถวายฎีกา,การร้องเรียน

plaque : a flat piece of metal, stone, wood or plastic with writing on it which is fixed to a wall, door or other object - แผ่นจารึกตัวหนังสือหรือภาพ

violation : an action that is against a law, agreement, principle, etc. - การฝ่าฝืน