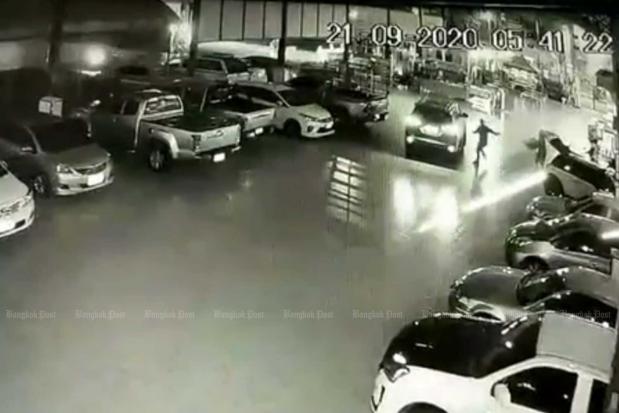 The killer is seen running to a car after shooting a woman who had just given alms to a monk, in the car park of Wat Nimmanruedee in Bangkok shortly before dawn on Monday. (Capture from video clip posted on rescue volunteer Chonyuen Wisutthipat Facebook page)

An immigration policewoman has been arrested and charged with shooting dead another woman in a carpark at a temple in Bangkok on Monday momrning.

Investigators said it appeared the murder stemmed from a love triangle. The policewoman was jealous because the victim broke off their relationship and had another lover.

Pol L/C Siriwan Samretsilp, 37, who works at Suvarnabhumi airport, turned herself in to police on Monday.

Ms Siriwan is accused of killing Rinlada Phattanaphan, 39, in a car park in Bangkok.

Police charged her with murder, illegal possession of a gun and ammunition, carrying a weapon without permission and discharging a firearm in a public place.

According to police, the suspect shot Rinlada several times in the head about 5.41am on Monday, killing her instantly.

The suspect surrendered to police, but during interrogation denied all charges.

Police said security camera footage showed the victim giving alms to a monk at 5.35am on Monday. A black car was seen arriving at the carpark behind the woman.

At 5.41am, a person looking like a tomboy and wearing a black long-sleeved shirt and a pulled-down cap emerged from the black car and fired four shots at the woman's head from behind her. She fell to the ground. The killer then left in the black car.

love triangle : when one person loves another person who loves yet another person, making the situation complicated .... and dangerous - รักสามเส้า, ความรักระหว่างบุคคล 3 คน

tomboy (noun): a young girl who enjoys activities and games that are traditionally considered to be for boys; a young woman or girl who acts like a boy or man - ทอมบอย, เด็กผู้หญิงแก่นแก้วที่มีนิสัยคล้ายผู้ชาย, ทอม