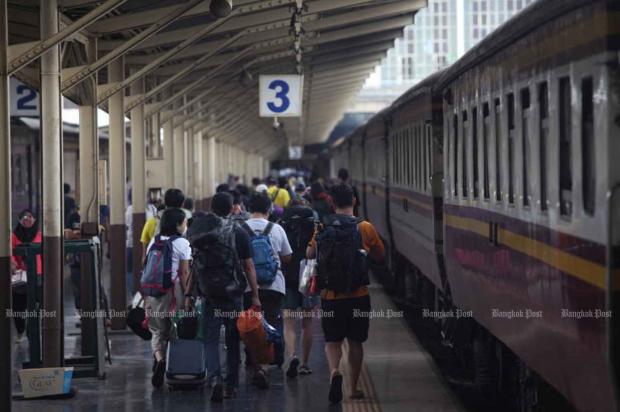 Travellers return to Bangkok at Hua Lampong railway station at the end of the long-weekend holiday early this month. (Bangkok Post file photo)

The cabinet on Wednesday approved two long-weekend holidays, one in November and the other in December, proposed by the Ministry of Tourism and Sports to help the economy.

The first break is November 19-22, with Thursday the 19th and Friday the 20th to be declared special public holidays.

In December, Monday the 7th -- originally a holiday in lieu of the 5th, National Father's Day, which falls on Saturday -- is to be deferred to Friday the 11th instead in order to create a long holiday Dec 10-13. Dec 10 is Constitution Day.

Tourism and Sports Minister Pipat Ratchakitprakarn said before the cabinet meeting that he hoped the long holidays would help domestic tourism and the economy.

Click "play" to listen to More long holidays in Nov, Dec and "Download" to keep this file for educational purpose.

deferral (noun): the action of delaying something until a later time - การยืดเวลา

in lieu of : instead of - แทนที่