As rallies to oust the government spread across the country, Prime Minister Prayut Chan-o-cha appeared to tone down his stance against protesters.

Government spokesman Anucha Burapachaisri said on Sunday the prime minister recognised the right to protest but said demonstrations must follow the law.

The tone seemed friendlier than on Saturday, when according to the spokesman, Prayut warned people not to attend gatherings and violate the law.


The prime minister has come under fire after police used violent tactics at Pathumwan intersection on Friday by firing water cannon at peaceful protesters.


This seemed to energise protests in Bangkok and other provinces. With about 20 protest leaders arrested, organisers have switched to "leaderless" rallies,  allowing individual demonstrators to address the crowds. 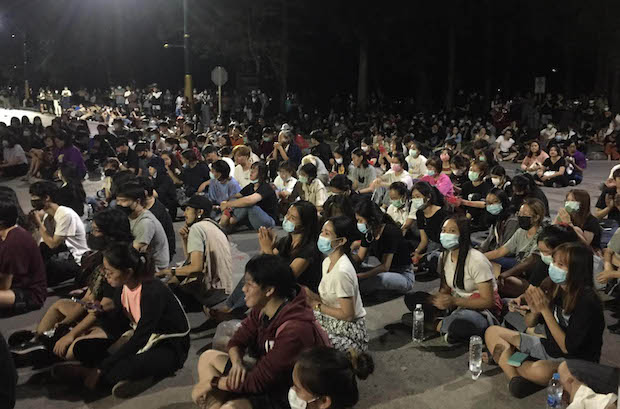 Major rallies were held outside the Future Park shopping centre in Pathum Thani province and Central Plaza WestGate in Nonthaburi province, where authorities said about 1,000 demonstrators gathered. The rally in Rangsit ended shortly before 8pm.


In Nakhon Ratchasima province, students -- estimated by authorities to number 600 -- gathered at Rajamangala University of Technology Isan to demand that the prime minister step down and senators picked by the junta resign.


In Khon Kaen, students numbering at least in the hundreds gathered to demand all activists be released.

Approximately one thousand students attended a rally at Chiang Mai University that ended shortly after 10pm on Sunday.

PM2.5 haze to stay until next week

'Extortion' principal: It's not my money