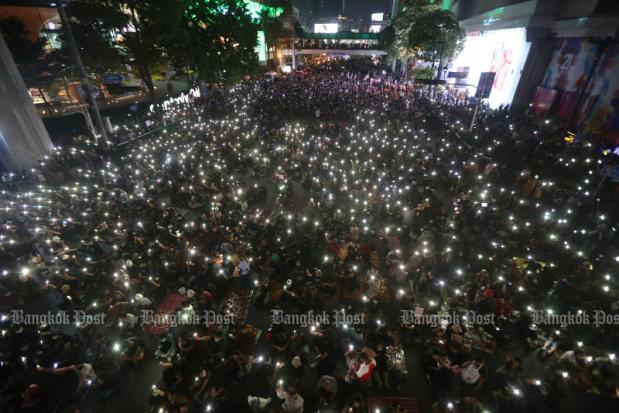 Protesters shine their mobile phone lights at Ratchaprasong intersection during a rally calling for the ouster of Prime Minister Prayut Chan-o-cha on Sunday. (Photo by Varuth Hirunyatheb)

The shopping area was transformed once again into a rally site by student-led protesters seeking to end the military’s longstanding control of Thai politics.

The rally started slowly, but gathered pace as a second stage was set up.

Jatupat Boonpattararaksa of the Dao Din group said the Ratchaprasong rally was to send a clear signal that Prayut’s time as leader of Thailand was over.

The rally came after the prime minister refused to heed the protesters’ Saturday deadline to quit before Parliament holds a special session on Monday and Tuesday to find a way out of the political conflict.

Mr Jatupat said he had little hope that the crisis could be resolved in Parliament, and protesters would continue their peaceful demonstrations.

Click "play" to listen to Thousands pack Ratchaprasong to call for Prayut to quit and "Download" to keep this file for educational purpose.

longstanding (adj): that has existed or lasted for a long time - นาน, ยาวนาน

pace : the speed at which something happens or is done - อัตรา

protester : someone who shows that they disagree with something by standing somewhere, shouting, carrying signs, etc - ผู้ต่อต้าน, ผู้ประท้วง

signal : to be a sign that something exists or is likely to happen - ส่งสัญญาณ

step down : resign or leave from a high position or job - ลาออก, ลาออกจากตำแหน่ง

transform : to change from one form into another - เปลี่ยนไปสู่อีกสิ่งหนึ่ง