The Democrats are working overtime to combat charges they have tried to influence the Constitution Court in their dissolution case. 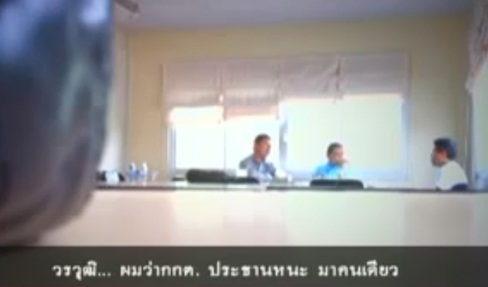 From left to right, Worawut Nawapokin, Democrat Party MP Wirat Romyen Pasit Sakdanarong, secretary to the president of the Constitution Court are caught by a hidden camera discussing the Democrat Party dissolution case.

There is nothing like video footage from a hidden camera of an alleged scandal to catch people’s attention.

Yesterday, Puea Thai party spokesman Prompong Nopparit brought in reporters to play a video he says shows the Democrat Party attempting to influence the court ruling in the case in which it is accused of misusing election funds.

In that case, the Democrat Party could be disbanded and its executives banned from politics for five years if found guilty.

The clip is one of five getting much attention on youtube. It appears to show Democrat Party MP Wirat Romyen asking for the help of Pasit Sakdanarong, secretary to the president of the Constitution Court, to persuade Election Commission chairman Apichart Sukhagganond to testify in court in favour of the Democrat Party.

The clip, which as of this morning had been viewed more than 83,000 times, came from a camera hidden in the room of a restaurant.

Mr Wirat says the clip is clear evidence of a carefully prepared plot to destroy the Democrats. He admitted being present at the restaurant meeting and he identified the person he is seen speaking with as ‘‘Mr P’’.

He said Mr P contacted him through Worawut Nawapokin, also seen in the clip, who is an adviser to the lower house committee on local administration chaired by Mr Wirat.

The Ranong MP said he agreed to meet Mr P at a Bangkok restaurant on Oct 7 because Mr P was a secretary to the president of the Constitution Court.

But he said it was now clear he had been set up as a hidden camera was trained on him throughout the meeting.

The other clips show photos of Privy Council president Prem Tinsulanonda talking to a group of people with present and past members of the Constitution Court present, plus segments from three secretly-recorded meetings of Court judges. They are certain to be the subject of much discussion in the coming days.

dissolution – the process of officially ending the existence of a group of organisation การยุบ (พรรค สภา)
footage – film of a particular subject or event ฟิลม์หรือคลิปภาพยนตร์
alleged – claimed to be true although not yet proven ที่ถูกกล่าวหา
scandal – a situation in which important people behave in a dishonest or immoral way that shocks people เรื่องอื้อฉาว
influence – to try to affect or change someone’s opinion มีผลต่อการตัดสินใจ
ruling – a decision by a court of law คำตัดสิน คำชี้ขาด
funds – money needed or available to spend on something เงินทุน
ban – to officially say that someone is not allowed to do something   ห้ามอย่างเป็นทางการ
find guilty – to prove in a court of law that someone has committed a crime พิสูจน์ว่ามีความผิด
disband – (of a group) to end; to stop working together ยุบ(พรรค)
testify – to make a statement about something that you saw, know, or experienced, usually in a court of law ให้การเป็นพยาน
in favour of – supporting a person or an idea, proposal etc that you believe is right พิพากษาให้ สนับสนุน
evidence – information that is used in court to try to prove something หลักฐานประกอบการไต่สวนคดี หรือพิจารณาคดี
plot – a secret plan to do something bad  แผนการลับ
admit – to agree that something is true, especially when you are unhappy, sorry or surprised about it  ยอมรับ
identify – to specify who someone is  ระบุชื่อ
set up – to arrange a situation so that someone is blamed for doing something, especially something illegal ใส่ร้าย หาความร้ายป้ายผู้อื่นให้ได้รับความเสียหาย
train – (of a camera, gun, etc.) to point at; to focus on เล็ง
leading question – a question intended to get a particular kind of answer
Privy Council – the group of appointed advisors to the King of Thailand   สภาองคมนตรีไทย
segment – a part of something ตอน
judge – someone whose job is to make decisions in a court of law ตุลาการ, ผู้พิพากษา