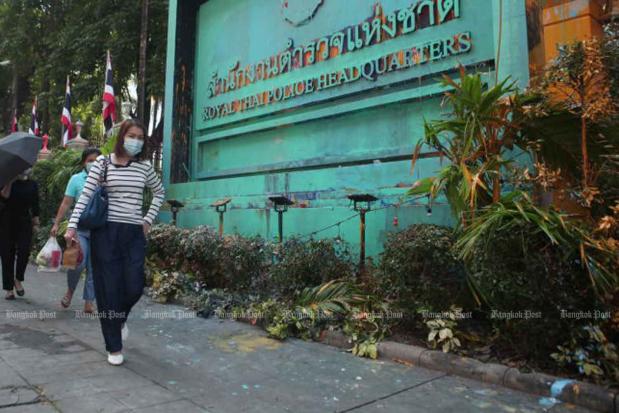 Pedestrians walk past the Royal Thai Police headquarters. The sign was cleaned after it was splashed with paint by anti-government protesters on Wednesday evening. (Photo by Apichart Jinakul)

Police are hunting for a man wearing a pink raincoat who may have fired shots at people protesting outside parliament during the violent clashes on Tuesday.

Police said the man was believed to be a guard of the People's Movement protesters and is suspected of having shot at people on Thahan Road.

Meanwhile, Labour Minister Suchart Chomklin on Thursday denied any links with a group of yellow-shirt demonstrators who fought with pro-democracy protesters outside parliament.

The yellow-shirt protesters were said to have travelled from Chon Buri, which is Mr Suchart's political stronghold.

Click "play" to listen to Police hunt 'pink raincoat' rally gunman and "Download" to keep this file for educational purpose.

clash : a brief fight between two or more people - การปะทะกันสองฝ่าย

live round : a real bullet fired from a gun, rather than a blank round which is not real -

opened fire : started shooting at something with guns -

stronghold : bastion; an area where there is a lot of support for a political party  - ฐานเสียง, ฐานที่มั่น, ขุมกำลัง

weapon : an object such as a knife, gun, bomb, etc. that is used for fighting or attacking somebody - อาวุธ